Review of the 2018 new-gen Maruti Swift which is India's one of the most lovedhatchback. We've reviewed the car on the basis of its looks, interior, features, engine and performance.

Maruti Suzuki Swift is one of the most popular hatchbacks in the Indian market, which has a legacy of over 14 years. The car was first launched in 2005 and it gets first update in 2011. The second-gen model employs glitzy ornaments on the curvaceous body, sharper pulled-back headlights, receding roofline with floating effect and courtesy of the black A-pillar which gave the car a sportier attitude. Afterwards, the company launched the third-gen Swift in 2018.

The car is doing wonders for the company by getting sold in good numbers. The 2018 Maruti Swift looks quite sporty and it is a fun to drive car. We have got a chance to drive the new-gen Maruti Swift, here's the review about what we think about the all-new 2018 Swift. The 2018 Maruti Swift looks quite sporty and it is a fun to drive car.

The 2018 Maruti Swift looks very sporty and aggressive on the outside. One may see some elements which resemble from the previous-gen Swift. The new-gen model gets some premium looking elements like blacked-out A and B along with a blacked-out C-pillar which gives the Swift a floating roof effect and, that also includes the rear door handle by which the all-new Swift looks like a two-door coupe. The hatchback is being offered with 6 amazing colour shades namely Solid Fire Red, Pearl Arctic White, Metallic Silky Silver, Metallic Magma Grey, Pearl Metallic Midnight Blue and Pearl Metallic Lucent Orange. The new-gen model gets some premium looking elements like blacked-out A and B along with a blacked-out C-pillar which gives the Swift a floating roof effect.

At the front, 2018 Swift gets a single aperture grille with horizontal slats. For better illumination, the hatchback now employs LED projector units and LED DRLs that looks quite similar to the ones which come equipped in Dzire. Moreover, it also offers fog lamp which comes embedded into a blacked out insert. In terms of dimensions, the all-new Swift is 3840 mm length, 1735 mm in width, 1530 mm in height and has a wheelbase of 3840 mm. So, dimensionally the new-gen Swift 40 mm wider and has 20 mm longer than its predecessor. If you are an owner of the previous-gen Swift, then you can easily notice an increase in width.  On the side, the hatchback rolls on 15-inch sporty looking alloy wheels. The car also gets electronically adjustable ORVM with integrated side indicators along with body coloured front door handles. The new-gen Swift now features a smart looking rear which offers new bumper, LED tail lamps, spoiler with integrated stop light and Swift badging.

The new-gen Maruti Suzuki Swift gets a premium looking cabin. The cabin of the car is driver focused as the centre console is slightly tilted towards the cockpit. The centre console accommodates a 7-inch Smartplay touchscreen infotainment which supports Apple Car Play and Android Auto and, it comes available only with top of the line variant. The dashboard gets central aircon vents and rotary auto aircon controls. The automatic A/C works pretty well in freezing out car's temperature in no time on a hot sunny day. The A/C vents are finished in black with satin silver highlights which enhances the sporty appeal of the cabin. The 2018 Maruti Swift also acquires a leather-wrapped flat-bottom steering wheel which offers a decent amount of grip. One can easily access the infotainment system with the help of steering mounted controls. The cabin of the car is driver focused as the centre console is slightly tilted towards the cockpit.

As we've told you earlier that the new-gen Swift gets increased width and longer wheelbase that has resulted in improved cabin space. Moreover, the seats offer sufficient amount of comfort, which will make your everyday commuting hassle-free. As compared to the second-gen model, the new-gen Swift has more knee room and shoulder room. Storage is not an issue in the new-gen model as it offers a glovebox, cupholders, bottle holders, side pockets and 268 litres of boot space (the boot is enhanced by 58-litres). The car comes loaded with features like ABS, dual front airbags, and ISOFIX child seat anchorage points as standard. On the other hand, the top-spec 2018 Swift features a 7-inch touchscreen with Bluetooth connectivity, Android Auto and Apple CarPlay, automatic climate control, a leather-wrapped steering wheel, and automatic headlamps. The instrument console comprises an analogue tachometer with a heat indicator on the left and a speedometer with fuel indicator on the right. A TFT digital display offered in the middle which provides information regarding power/torque distribution, trip meter, time and temperature. The all-new 2018 Maruti Suzuki Swift derives power from a petrol and diesel unit. The first one is a 1.2 L K-Series petrol motor which develops 82 bhp at 6000 rpm and 113 Nm of torque at 4200rpm. The car also gets propelled by a 1.3-litre oil burner which churns out power and torque outputs of 74 bhp at 4000 rpm and 190 Nm of twisting force at 2000 rpm. Transmission duties in the new-gen Swift are done by a 5-speed AMT and manual gearbox. It is also 85 kgs lighter as the car is built on Maruti Suzuki's Heartect platform. The company claims that the 2018 Swift is 10% faster to touch 100 km/h mark. The car is now more fuel-efficient, which is rated to provide a mileage 22 km/l (petrol) and 28.4 km/l (diesel).The fuel tank is big enough to store 37 litres of fuel at once. 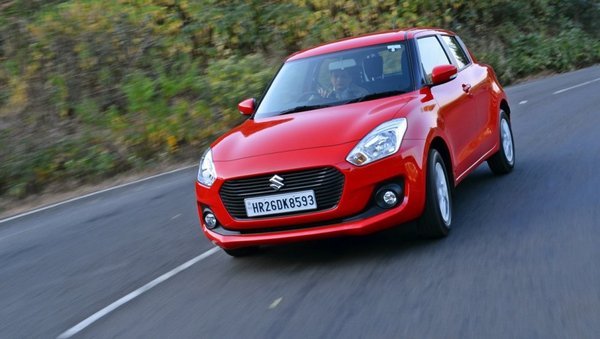 We liked how the petrol engine performed as it contains some incredible amount of refinements.

We have tested both the diesel and petrol powered Swift. We liked how the petrol engine performed as it contains some incredible amount of refinements. The engine is peppy in nature and, the 5-speed gearbox shifts smoothly to yield a fun to drive experience. The AMT (automated manual transmission) works skillfully with petrol mill at economical city speeds. This is why petrol AMT Swift feels much more smooth and refined. On the other hand, the diesel engine gets a bit rough at higher revs as compared to the petrol which stays silent with hardly any engine noise filtering into the cabin. But, we also have some benefits offered with the diesel motor. The diesel mill provides a punchy mid-range once it overcomes the initial turbo lag while the petrol unit offers a weak mid-range. So, it's quite effortless on the pockets of customers who clock 80-100 km on an everyday basis. 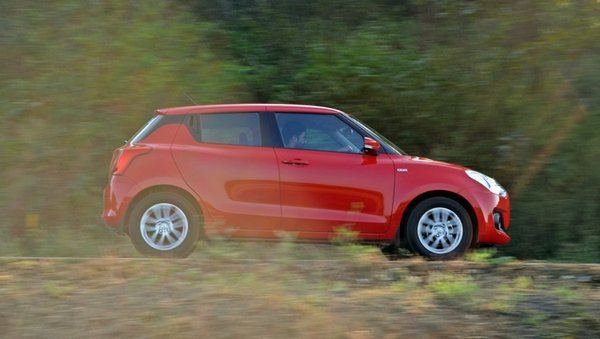 The compact design of the car helps to easily cut through the bumper to bumper traffic.

Most of you are willing to know that the new-gen Swift has maintained to keep the quality of the older-gen mode alive in terms of driving properties and we’re pleased to report that it has. The new model is nimble around the corners and its new stiffer chassis assures that the all-new Swift is still fun to drive car on twisty mountain roads. But at slow speeds, the suspension feels a bit firm but supports the car control its stability through corners by checking body roll. The 4.8m of turning radius helps the car to turn around a bit quickly. As the speed of the raises, it does an astonishing job of countering bad road conditions. Moreover, the hatchback feels stable at three-digit speeds, notwithstanding the reduction in weight. The steering wheel feels light and stable on high speeds. The compact design of the car helps to easily cut through the bumper to bumper traffic. Braking is done by disc brakes up front and drum brakes at the rear. Suspension duties are taken care of by Mac Pherson Strut at the front and Mac Pherson Strut rear.

The 2018 Maruti Suzuki Swift falls in a price bracket of Rs 4,99,000 to Rs 8,85,552 (ex-showroom, Delhi). The car comes available in 14 different variants- LXi, VXi, LDi, VXi AMT, ZXi, ZXi AMT, VDi, ZXi Plus, VDi AMT, ZDi, ZDi Plus AMT, ZDi AMT, ZDi Plus and ZDi Plus AMT. The new-gen Swift is worth for buying car as it carries distinctive looks which are subjective and it comes loaded with all the bells and whistles like an efficient motor, an option of AGS gearbox, enhanced occupant and boot space. Overall the 2018 Maruti Suzuki Swift is a great package. It's much better than its predecessors and feels exceptionally well as compared to the previous-gen models. This is what we feel about the all-new 2018 Maruti Suzuki Swift. Let us know in the comment section below, which feature you liked the most in the new-gen Swift. Stay tuned to the Indian Auto for more such reviews and don't forget to subscribe our YouTube channel. 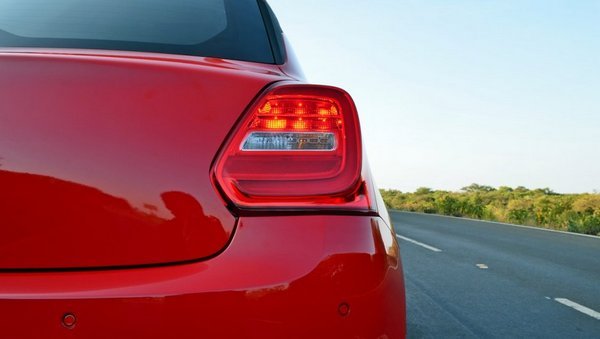 The NHAI have set this record at NH 52 between the Vijayapur-Solapur stretch. This follows just after the Union Transport Minister announced that road construction speeds have reached 30 km a day.

Maruti Swift is due to receive its new facelift in the next few days. Ahead of the launch, Maruti has released the new teaser video for the midlife facelift Swift.

Next-gen Maruti Swift in Development, Launch in Late 2022 or Early 2023

Maruti Swift is one of the best hatchbacks that you can buy currently. It is due for a facelift soon, but reports suggest that an all-new Swift is in the development already. Read on for the full story.

2018 Maruti Suzuki Swift AMT ZXI AT for sale in Ahmedabad