As a matter of fact, the Hyundai i20 (Elite i20) in India has been a popular hatchback car for a long time now with its USPs being good build quality, well-loaded cabin, reliable engines as well as strong brand images. However, the Hyundai i20 is facing the increasing heat in the segment due to the arrivals of new Tata Altroz, Volkswagen Polo facelift or the bad blood with Maruti Baleno. Hyundai then has no option other than giving the i20 a comprehensive upgrade.

To remind you, the current-gen India-spec Hyundai i20 gets a 3,985 mm in length, 1,734 mm in width and 1,505 mm in height along with the wheelbase of 2,570 mm. While both versions are still ducking under the four-metre mark, the slight growth in terms of sizes of the 2020 Hyundai i20 will bode well for the increase in the amount of legroom and boot space compared to the existing model.

The first set of images of the 2020 Hyundai i20 has cropped up online, showing how the new-gen i20 look like in the production guise. The 2020 i20 sports some major styling changes on the exterior profile thanks to the all-new “Sensuous Sportiness” design language. In fact, Hyundai revealed that the new i20 is the company’s first hatchback car to flaunt the Sensuous Sportiness design philosophy which made its India debut on the Le Fil Rouge Concept at the Auto Expo 2020 or in the international-spec new-gen Hyundai Sonata. 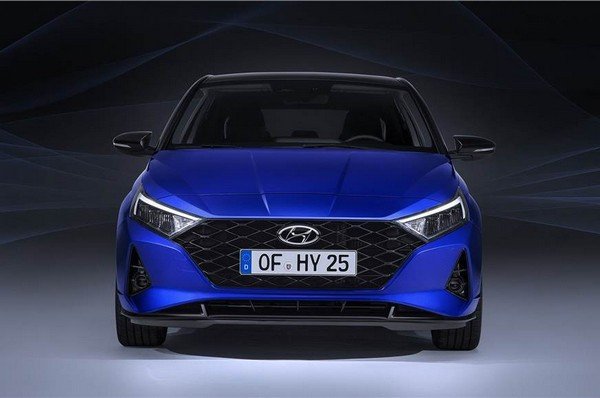 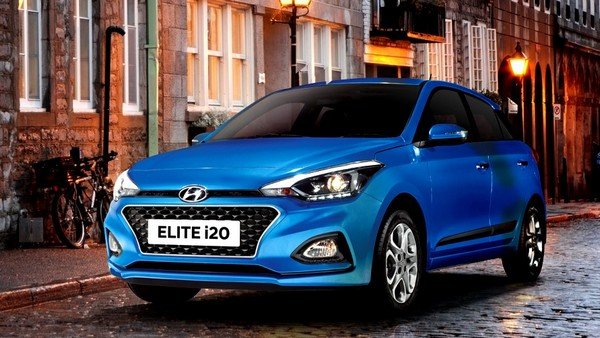 Visually, the 2020 Hyundai i20 looks more aggressive than its predecessor. It sports a new front fascia with a larger signature cascading grille which gets blacked-out and diamond-pattern mesh treatments. The headlamps setup, as per our subjective sense, looks sharper and sexier than the outgoing model. The fog lamps carry forward its triangular shape of the 2020 Elantra and that again looks sportier than the angular fog lamps housing of the current model. The cut and creases on the bonnet are more prominent as you can see, and the lower section on the bumper is also larger than that of the old Hyundai i20. Chrome trims are added to the side profile of the new Hyundai i20 that looks a little better than the conventional blacked-out windows of the old hatchback. Again, the character lines and creases look much deeper on both sides of the car while there're almost no character lines standing out on the sides of the current-gen model. A contrast “Phantom black” roof, lavishly-designed alloy wheels are something makes the new i20 more impressive over the old-gen i20. 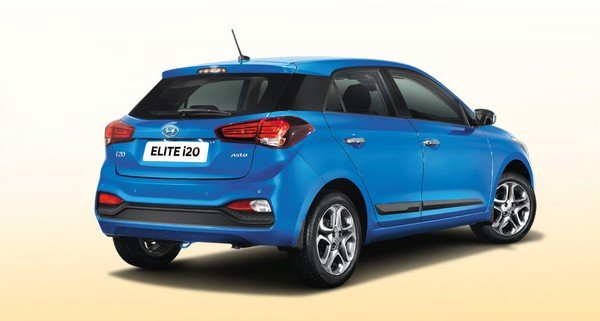 The rear end of the new Hyundai i20 also receives some massive changes. The outgoing LED taillamps of the old Hyundai i20 makes room for the angular Z-shaped taillights with LED inserts of the upcoming new-gen model. The LED strip running to the width of the new-gen i20 is very trendy, something that the old i20 is given a miss. The same goes for the blacked-out upper section of the boot lid just like what we’ve seen in the Tata Altroz hatchback. The black skid plate is also brought to the next-gen model, making the rear fascia of the car more enticing.

Overall, the 2020 Hyundai i20 looks much prettier and sexier than the outgoing Hyundai i20.

While not much has been revealed by Hyundai when it comes to the new i20’s interior but a sketch, we still catch a glimpse of how it might look like on the inside compared to the old i20. Firstly, we see the presence of a new Creta’s four-spoke steering on the 2020 Hyundai i20 and certainly, it looks far better than the outgoing conventional three-spoke steering unit. The beige-black theme on the old hatchback car has been removed, paving the way for the more premium all-black cabin. The dashboard layout looks much different from the preceding version. As such, the current-gen Hyundai i20 flaunts a traditional dashboard as seen in many other hatchback cars in India. The dual centre air vents are mounted above the infotainment display which is flanked by some controls buttons and knobs. Whereas, the 2020 Hyundai i20 endears its appeal with a massive free-standing 10.25-inch touchscreen infotainment system dominating the centre place. There are multiple horizontal blades and layers running through the dash which takes inspiration of the old-spec Audi Q7 SUV, making a major highlight for the new i20’s interior. There are some yellow colour-coded inserts around the cabin such as in the upholstery, air vents and inside door handle. The seats are completely new and premium, taking up the place of the black-beige fabric seats. The sketch also confirms that the 2020 Hyundai i20 will come with ambient lighting which is also given a miss on the old-gen model. Hyundai’s BlueLink connectivity technology will be made available on the new i20 that is also unavailable in the previous-gen Hyundai i20 for sure. All in all, based on our expectation, the all-new Hyundai i20 will play its trump cards on the feature package. It will be more convenient and feature-rich than the old i20 to some extent thanks to the additions of advanced features like in-car connectivity tech, fully-digital instrument cluster and a more modern infotainment system.

The 2020 Hyundai i20, in its international form, comes with adaptive cruise control based on the satellite-navigation that enables the increase and decrease of vehicle speeds to the driving conditions. Speed limiter, lane following assistance, forward collision warning with cyclist and pedestrian protection, parking collision avoidance, blind-spot collision avoidance and rear cross-traffic warning, etc. are included in the intelligent safety package.

While the current-gen India-spec i20 has been quite a safe car with dual front airbags, anti-lock braking system, reverse parking sensors, front seatbelt reminder, seatbelt pre-tensioners, speed alert, engine immobilizer, etc. as standard across the variants. Expect the upcoming Hyundai i20 to be safer than the outgoing car by retaining these features and adding more to the list.

When comparing the 2020 Hyundai i20 vs old i20, we notice another massive change made to the new-gen hatchback. The all-new Hyundai i20, as reported earlier, will be powered by a 1.0-litre turbocharged petrol engine that will get supports from a 48V mild-hybrid system. This mill comes mated to a 6-speed MT and a 7-speed DCT. It can deliver two different states of tune: 99 HP and 120 HP and comes mated to either a 6-speed MT or a 7-speed DCT. For the very first time, we’ll get to see a 7-speed dual-clutch automatic transmission on the i20’s range. Note that the outgoing hatchback car is available with a CVT unit.

Besides, Hyundai will retain the outgoing 1.2-litre petrol engine from the old-gen i20, making it the entry-level engine of the new car’s range. This engine will carry on using the 5-speed manual gearbox.

Given the fact that the outgoing i20 diesel has been discontinued from the lineup ahead of the stringent BSVI norms, the current-gen Hyundai i20 is now available with a single petrol mill on boards. However, sources suggest that the 2020 Hyundai i20 will come with a BS6-spec 1.5-litre diesel motor that churns out 90 HP of maximum power. From this, the 2020 Hyundai i20 seems to borrow the engine and gearboxes option of the successful Hyundai Venue that makes it more tempting and more powerful than the outgoing model.

We are yet to know the top speed of the next-gen Hyundai i20 as it’s been a while from its market launch. The old-gen Hyundai i20 claims to reach a top speed of around 154 kmph and the acceleration ( from 0 – 100 kmph) of 11.5 seconds. Further info will be updated to the launch of the 2020 Hyundai i20.

The existing Hyundai i20 has an ARAI-rated fuel efficiency figure of 18.6 kmpl (petrol-MT) and a 17.4 kmpl (petrol-AT). Details on the new-gen i20's mileage will be updated soon.

9. Hyundai i20: Other Competitors

The Hyundai Elite i20 is rivalling the likes of Maruti Baleno, Honda Jazz, Volkswagen Polo and the recently-launched Tata Altroz, etc. in the competition of the hatchback segment.

The current-gen Hyundai i20 is totally a joy to drive. However, it seems to lack some factors that help it dethrone the sales of the current segment-leader Maruti Suzuki Baleno. With the next-gen i20, Hyundai aims to take the no.1 position from the Maruti. The 2020 Hyundai i20 seems to have everything on point, nice exterior, modern interior and good powertrain system – a very convincing car at a very competitive price point.

But do note that the current Hyundai i20 has been upgraded to the BSVI norms with its prices being at Rs 6.49 – 8.30 Lakhs (ex-showroom). So you have three choices to go for now: buying the Hyundai i20 in BS4 guise, choosing the Hyundai i20 BS6 or wait for the new-gen i20 (launch is slated for June of this year). If your budget is a bit tight, the BS4-spec Hyundai i20 which is being offered with some decent discounts this month will be a good choice. Otherwise, if you don’t mind paying Rs 90,000 extra money on the purchase, go for the BSVI-compliant i20. Lastly, in case you are in love with the new styling design, more plush cabin and new turbo engine of the next-gen model, let’s hold your buying back until this June. Of course, its price would be certainly higher than the BS4 counterpart. Just consider it!