If you are a first-time buyer, it is most likely that you would consider opting for the entry hatchback cars–the segment which is dominated by prominent names like Datsun Redi GO and Renault Kwid. Not until 2017 is the Redi-GO given a new 1.0L engine. The release of the new engine creates a direct and neck-to-neck competition between the Datsun Redi-GO and Renault Kwid 1.0L.

On interesting thing to know is that the 1.0-litre engine from the Redi-GO is actually brought from the Renault Kwid, which even makes the rivalry more participated. Datsun is the subsidiary of Nissan and, needless to say, Nissan and Renault have formed a strong alliance, leading to this interesting rivalry.

Assisting you in choosing the best hatchback, IndianAuto will give you a detailed comparison review of these two cars – Redi-GO 1.0L and Renault Kwid 1.0L.

The new Redi-GO has received not only the engine but also the same CMF-A platform from the Kwid as well. So, let’s look at each car’s dimension to see if there is any rendering that the Datsun is given to the Redi-GO. Renault Kwid is considerably wider and longer than Datsun Redi-GO

First of all, at 3679mm, the Redi-GO is 200mm shorter than the Renault Kwid. And the width of the Kwid is also 19mm wider than the Redi-GO. However, in terms of the height, at 1541mm, it is actually the redi-GO that is 28mm higher. With these differences, we can tell that the Kwid will be more spacious than the redi-GO And redi-GO’s ground clearance is apparently higher than that of the Kwid. In fact, redi-GO owns the segment’s greatest ground clearance of 185mm.

However, the smaller hatchback Redi-GO is the taller boy out of these two

Bearing the same engine option and the same platform, but these two hatchback looks completely dissimilar.

The Renault Kwid looks rugged and masculine and less hatchback-like, or we could say, it is more like an SUV while the redi-GO is all about a conventional hatch with distinctive hatchback shape.

At the front end, Renault Kwid hosts a tough and aggressive face with a large grille and angular headlamps together with boxy foglight housing. On the other hand, the redi-GO features a hexagon grille with swept-back headlights, and the overall design is curving and sporty, which is totally different from the Kwid. 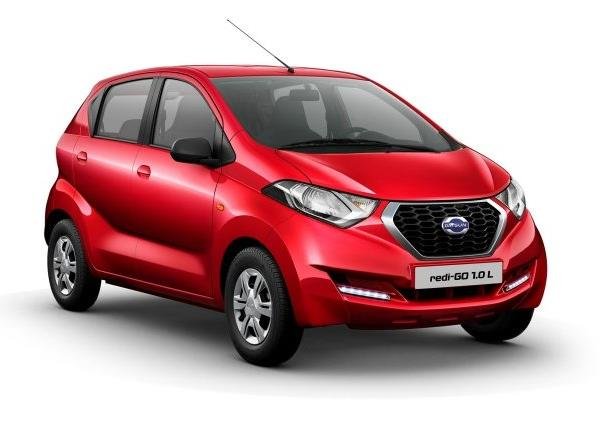 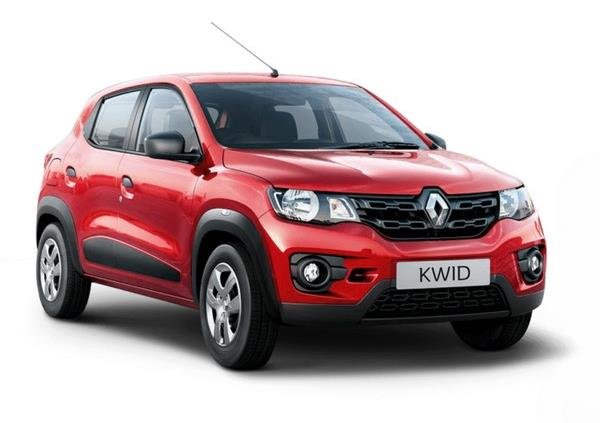 From the side, to boost the roughness, the Kwid even gets some SUV-like touch like a plastic cladding on the body as well as on wheel arch. Basically, apart from its mini size, there is hardly anything that tells it is a hatchback rather than an SUV. Redi-GO, on the side profile, looks sporty with its extended ground clearance, and a strong and sharp waistline stretching toward the rear end. 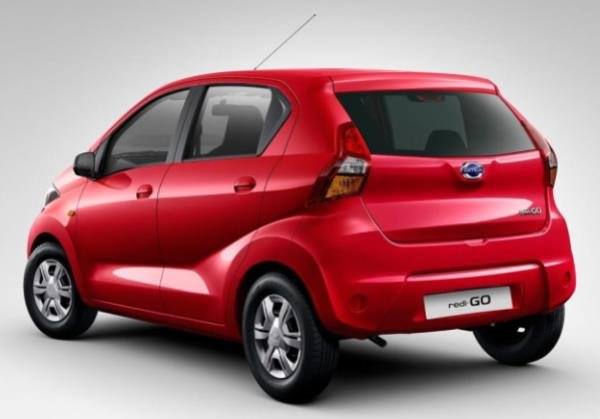 Generally, each car has its own distinctive style and it much depends on your taste to choose which design is most suitable.

When stepping into the cabin, you can see that these two cars are delivering two distinctive styles: while the redi-GO goes for a sporty design with some, the Kwid looks simple and minimal but still smart-looking. 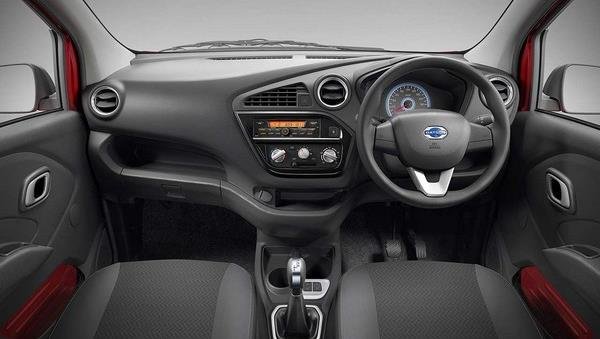 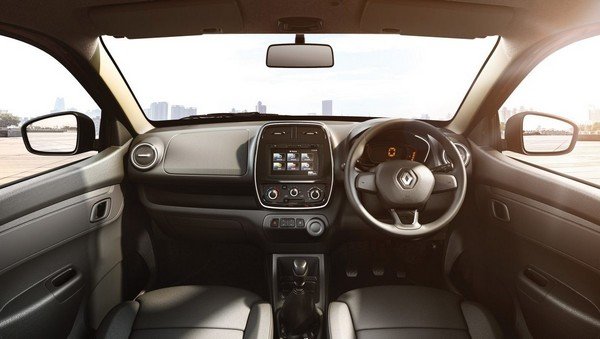 Both Kwid and redi-GO shares some common features like electronic power steering, front power window, as well as entertainment with USB, Aux input, and CD player.

But the Kwid still scores over the redi-GO by offering more tech and comfort than the redi-GO. For example, it comes with a 7-inch touchscreen infotainment system. It also provides Bluetooth connectivity and built-in navigation which are missed on the redi-GO.

The Kwid owns a bigger exterior dimension, the redi-GO, nevertheless, still manages to surpass the Kwid by providing more seating comfort. Specifically, it offers better front seats, more headroom, easier enter and exit. But still, when it comes to the legroom and shoulder room, there is no way the redi-GO could beat the Kwid with much humbler dimensions. 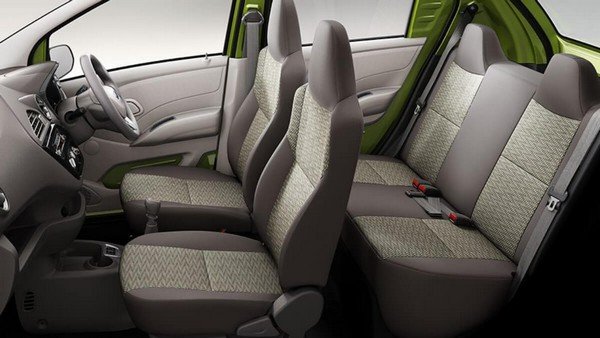 Renault Kwid offers a convenient and practical layout with many storage solutions. It offers large bottle holders on the front door. Moreover, the Kwid goes extra generous with two glove boxes. The Datsun Redi-GO might find themselves incompetent with a more limited storage space.

In terms of the cargo space, the Kwid is the winner with much larger room inside its boot. Kwid’s boot measures at 300 litres while the Datsun redi-GO stays humble with a 222-litre cargo space.

Driver airbags, keyless entry, and centrol locking are all featured on both cars as safety features. But the Kwid offers more appealing safety package with seatbelt pretensioner and power door lock.

These two cars, as mentioned before, are powered by the same engine – a 1.0-litre mill. And redi-GO doesn’t tune the engine for different power output, which means that it still pulls out 68PS and 91Nm. Moreover, the transmission duty is done by the same five-speed manual gearbox. Nevertheless, there still be some small twist of the redi-GO which brings out a slightly smaller mileage of 22.5kmpl compared to the 23.01kmpl on the Kwid.

With the same engine option, there are not many differences in the mechanical aspect to talk about. 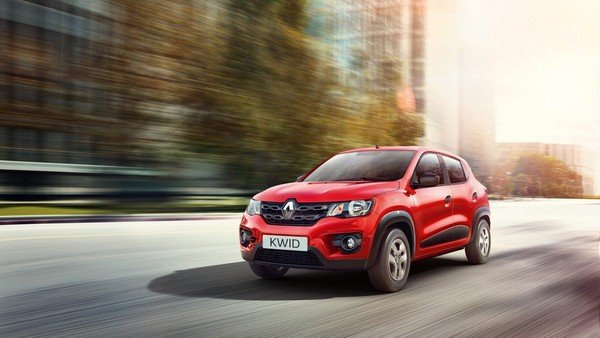 The shared engine brings out a decent performance in both cars

Even not so impressively powerful, the engine is capable to drive around the city and make a quick overtaking. But at low revs, there is still some lag. And when approaching the highway, both of them feels underpowered and nervous. The biggest difference between the two cars lies in the acceleration. In the 0-100kmpl sprint, Datsun takes 19.01 seconds and the Kwid outruns in just 17.93 seconds. Inside the cabin, Kwid proves to have better insulation without the entering of the noise outside.

Renault Kwid 1.0L ranges from 3.49 lakh to 4,20 lakh and the Datsun redi-GO is priced from 3.57 to 3.72 lakh. With the base trim, the Kwid is priced slightly higher than the redi-GO, while on the higher trim, the Kwid will cost you more. 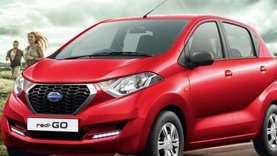 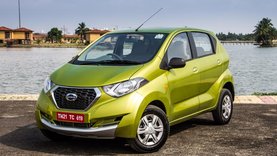