Toyota Camry Old Vs New: What Are The Updates On The 2019 Camry?

The premium sedan is now getting its generation updates in 2019. New Camry continues to come into with one variant, priced at 36.95 lakh.

2019 Toyota Camry is recently launched at 36.95 lakh. The new generation comes exclusively with a hybrid powertrain. Other than that, there are plenty of new twists and tweaks given to the new-generation Camry this time around. Here is the comparison between the old and the new Camry.

First of all, Toyota has made an essential change in terms of the mechanical part. The old platform is replaced by the new Toyota New Global Architecture (TNGA) platform found in the Lexus ES 300h. The TNGA platform has cut down on the kerb weight, lower the ground clearance, hence, improving the handling.

The new platform has increased the dimension of the vehicles. At 4880mm and 1840mm, new Camry is longer and wider than the previous models by 35mm and 15mm. The wheelbase is also 50mm longer accordingly. The only dimension that is swindled in the new Camry is height. It now stands at 1455mm, which is 25mm short than its predecessor.

The new Camry has started a revolution in its history of design. You could barely relate the new Camry to the older version. 2019 Toyota sports its latest design language – the Keen Look design. At first glance, it is hard to miss the prominent front horizontally-slated air dam that goes all the way to the border. What is previously a smart grille is now reshaped into a V-curved grille that houses Toyota’s badge in the centre. These two elements could be seen on the Corolla Altis and Yaris. The redesigned front headlights are now flanked by the smart-looking and sleek headlights. Just like its siblings, the new Camry also has automatic LED headlamps, LED DRLs and LED fog lights. But the headlamp unit is now packed with projector headlamps. Chrome application that was dominant in the last version is now deceased. On the front bonnet, it is given a bold and highlighted ceases, making the front look more muscular.

To the side of the new-gen Camry, it shares some similarities with the ES 300h. The silhouette of the Camry becomes more playful. The roof reminds us of that from a coupe as the C-pillar is less sloping and almost reaches the rear end. Sleek and neat are all that we could tell from the side profile.

On the rear end, Toyota has added a chrome trim that runs along the tailgate – this is a nice touch that actually refreshes the whole rear design, making it look more trendy and relevant. However, in general, the rear design could not impose the same effect as the revised front profile.

If you have been amazed by the new look of the Camry, its interior is definitely a make-over in the true sense of the word. It is where the design gets a bit tasty and quirky. Right the centre of the car, you can spot right away the new touchscreen unit that is located in a uniquely-shaped housing with a flowing-down plastic line. Around the touchscreen, the control buttons are now illuminated touch-sensitive. In this way, the control centre is now uncluttered and takes less space. The black-and-beige colour scheme continues to take over the cabin.

The interior of 2019 Camry looks cleaner and more modern

On the rear seat, on the previous version, Toyota has sported a quite unique and a modern touch of arm-rest-integrated rear AC control panel that displayed physical buttons. For now, it has been replaced by a touch-sensitive control unit. This unit could also double as infotainment controls as well.

Toyota also means to raise the bar for the practicality on the new Camry. The cabin is now laden with storage solutions, for example, cup holder on the central console, one-litre bottle holders on the doors as well as various storage spaces scattered throughout the cabin.

It is not an overhaul without the addition of some smart equipment to the feature list. Here on the new Camry, we have a sunroof. This is the first time that Toyota gives India customers a sunroof. On top of that, Toyota will bring the premiumness to a new level with a 10-inch heads-up display, not to mention the high-quality sound system of JBL-sourced 9 speakers.

On the infotainment system, the new Camry has firstly replaced the outdated 2-DIN music system with new 8-inch touchscreen infotainment. Besides Bluetooth, USB and AUX-in ports, the new unit also provides built-in navigation. However, the Camry has, unfortunately, skipped on Apple CarPlay and Android Auto, which is sad news.

On the comfort side, the Camry will continue with its already premium features package that includes

Apart from these, more techs will also join the party now. Here are some newly-added goodies on the 2019 Toyota Camry:

These goodies mark the Camry as an undeniable premium car.

The name Toyota itself is a golden ticket for the Camry to be easily recognized as a highly safe car. To even make it safer, with the new version of the Camry, Toyota has enhanced the built quality with new platform as mention above. What’s more, in the 2019 version, Camry Hybrid is offered with nine airbags, ABS with EBD, Stability Control and Traction control as well as Hill Hold Assist across its range. 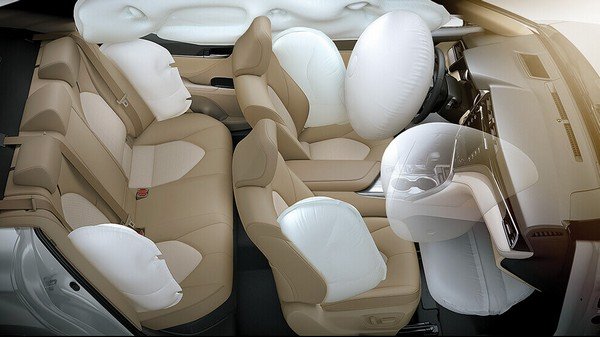 The new Toyota Camry is now only available with the hybrid powertrain. The internal combustion engine is the same 2.5-litre petrol engine used on the previous model. This unit alone is able to put out the peak power of 176PS and peak torque of 221Nm. On the electric side, it will be supported by an 88kW electric motor that replaces the old 105kW unit. This electric motor is good for 118PS and 202Nm. When working together, the hybrid system could make the total power of 218PS.  Six-speed electric CVT gearbox will transfer the power from the engine to the wheels.

The Camry now only comes with hybrid powertrain

One surprising fact about the new Camry is that, despite all the updates and new features, the price actually marks down a little bit. From 37.22 lakh, it is now rated at 36.95 lakh which is Rs 27,000 cheaper. This aggressively-pricing strategy will gain the Camry a huge advantage over its competitors. It will continue the rivalry with Honda Accord, Volkswagen Passat and Skoda Superb.