36 0
The 2019 Ford Figo Facelift is set to come in three variants, two new petrol engines and one diesel motor option.

The 2019 Ford Figo (facelift) is all set to be launched in India today. As per some media channels, the new Figo’s brochure has been leaked online right ahead of its launch. 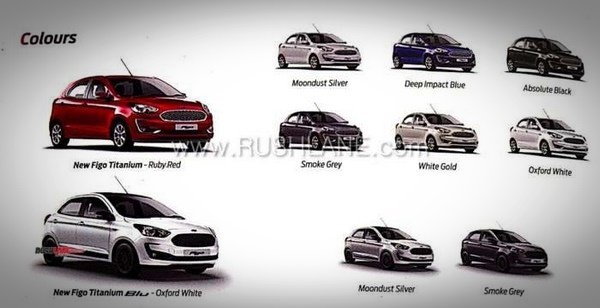 Ford is preparing to launch its facelifted Figo in India today

While the previous-generation Ford Figo has been on sale with four variants- Base, Ambiente, Trend, Titanium and Titanium+, we’re going to see the latest Figo model in three grades only, namely Ambiente, Titanium and new Titanium+ variant. As can be seen in the leaked brochure, a host of updated features of the Figo will come. The cosmetic beauty will welcome the inclusion of reworked front and rear bumpers, Aspire-sourced mesh grille and updated automatic headlamps. Meanwhile, the interior of 2019 Figo will be heavily inspired by that of Freestyle and Aspire. It will pack a 7-inch touchscreen infotainment system with navigation, engine start push-button, seatbelt reminder for the front passenger, rear parking sensors with rear-view camera, side & curtain airbags which are to list out a few in the mid-cycle update. The 2019 Ford Figo facelift sees a plethora of advanced fitments

The newly-developed top-spec Ford Figo Blu trim is suspected to come as an alternative to the Sports Edition. It stands out from the Figo’s lineup by 15-inch premium black alloy wheels, body-coloured wing mirrors mounted with indicators, an all-black mesh grille and grille surround, sporty decals, blue fog light bezels and more. However, a distinctive tuned suspension won’t make it to the range-topping variant.

Powering the 2019 Ford Figo Facelift will be a new 1.2 and 1.5-litre Ti-VCT 3-cylinder petrol engines come as the replacement for the outgoing 4-cylinder version together with a 1.5-litre TDCi 4-cylinder diesel option. The smallest petrol engine can produce 96 PS of power at 6,500 rpm as well as 120 Nm of torque at 4,250 rpm. A 5-speed manual transmission presumed as Getrag-sourced MX65 will be available on this version.

Besides, the 1.5-litre engine makes the state of tune of 123 PS at 6,500 rpm along with 150 Nm at 4,500 rpm. It comes mated to a 6-speed torque converter automatic transmission. Lastly, the diesel motor variant has been upgraded to generate a more decent power of 100 PS. The aforementioned 5-speed manual transmission will also make its way in the diesel version. As regards the fuel efficiency, the 2019 Ford Figo 1.2-litre petrol configuration’s rating offers up to 20.5 kmpl of mileage while the 1.5-litre petrol AT and 1.5-litre diesel model return the aggravated mileages of 16.3 kmpl and 25.5 kmpl, respectively. Prices of new Figo facelift will be announced in next hours, expected to start from INR 5 Lakh (ex-showroom, India) so that it will renew its rivalry with Hyundai Grand i10 and Maruti Suzuki Swift in the country.