The India-bound 2020 Hyundai Verna facelift was recently unveiled in Russia, where the third-generation of the company’s Maruti Ciaz and Honda City rivalling model is sold as the ‘Solaris’. It’s noteworthy here that the pre-facelift version of the sedan that was sold in Russia is the same as the car available here and that’s enough reason to believe that the updated version for both the countries would look similar to each other. In Russia, the Hyundai Verna is sold as the Solaris and the models seen above are Russia-spec units. The Indian version should look the same.

A new image that has surfaced online shows a 2020 Hyundai Verna parked close to a pre-facelift model. While the image doesn’t show the older model clearly, it still gives us a fair idea of what the two cars look like in comparison to each other. The newer car definitely looks sportier, which is largely due to the wider grille, sleeker headlamps, sportier bumper and revised fog-lamp housings.

The side profile of the 2020 Hyundai Verna remains almost the same as that of the outgoing model, with the only change coming in the form of new alloy wheels. The rear profile features a new bumper that carries a faux diffuser. The taillamps are new, too, and come with revised a glow pattern.

The interior stays more or less the same, with the only differences arising out of the new central aircon vents and a new floating-type touchscreen infotainment system that supports Apple CarPlay and Android Auto. The India-spec model could even get an all-digital instrument console. Engine options for the India-spec Verna facelift could include BSVI-compliant 115 PS 1.5-litre petrol and 115 PS 1.5-litre diesel engines. Both the motors will likely come mated to a 6-speed manual transmission each. 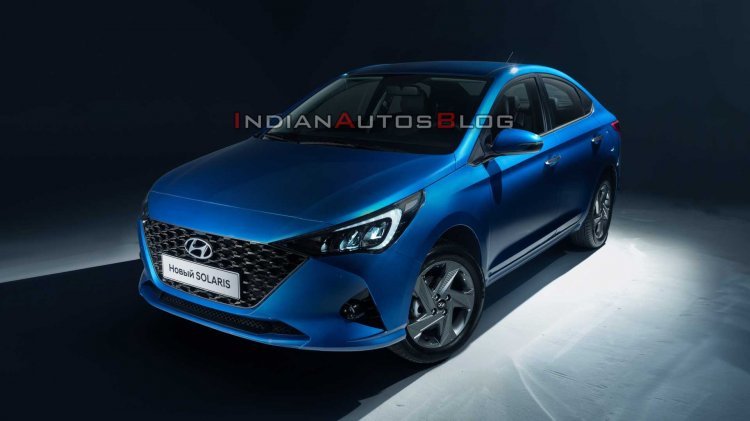 Compared to the pre-facelift, the 2020 Hyundai Verna looks sportier and appears to sit lower due to the new bumpers.

Moreover, the petrol motor could get a CVT option, while the oil-burner would be optionally available with a 6-speed torque-converter automatic transmission. These motors will be shared with the new-gen Creta and are essentially the same engines as those on the Kia Seltos. India launch will likely happen by mid-2020, while prices could see a marginal increment.