Mercedes-Benz has revealed the Coupe iteration of GLE SUV, which was unveiled a few months back. the GLE Coupe will replace the outgoing model across the globe after its launch later its official unveil to the masses at the Frankfurt Motor Show in September.

Mercedes-Benz is wooing their SUV fans with the newer generation of their SUVs, starting from the GLS, then GLE, and GLC, with all models getting a new DNA in them. Also, Mercedes-Benz went a step ahead and showcased an all-new SUV, the GLB. The Coupe counterparts of the regular high rider missed the show though, and there was no hint on their arrival. Now, Mercedes-Benz has decided to showcase the GLE coupe to the masses at upcoming Frankfurt Motor Show in September to rival the Porsche Cayenne Coupe, Range Rover Velar, BMW X6, and Audi Q8. But the German manufacturer has revealed the car digitally on the internet, gee-whiz; it surely comes as a gourmet’s delight.

Also Read - What To Expect From The 2019 Mercedes-Benz GLE? Mercedes-Benz has unveiled the GLE Coupe ahead of its global debut at Frankfurt Motor Show in September.

Also Read - The Greatest Mercedes Benz Cars Of All Times.

The Coupe is based on the full-size GLE and will replace the older generation of the GLE Coupe, which is on sale in India. The new car has been endowed with a wider and squatter stance in comparison to the model it will replace. The new car is longer by 15mm, wider by 63mm and the wheelbase has also been increased by 20mm as compared to the older generation. To give the driver an enthusiastic driving experience, the car is lower by 60mm in comparison to the standard GLE it is based on. The Coupe has a similar face at the front to the full-size GLE.

At the front, the Coupe looks identical to the standard GLE, with similar bumpers, grille, headlamps, bonnet, and the rake angle for the a-pillar. On the sides, the car looks identical up till the rear wheel, below the window line, while the coupe-style roof gives the car a new rear end. The sloping roof and the bangle-butt design for the rear, do add a lot of drama to already gorgeous GLE SUV. The wheels are also offered in different size variation to offer more options and can be had from 19-inch to 22-inch sizes to further improve the style quotient on the sides. With similar dashboard layout to the new GLE, the Coupe has increased space on offer in comparison to the car it will replace.

Much has not changed on the inside of the Coupe from the GLE since it has the very same dashboard architecture and raised center console design. The dashboard sports two different 2 different 12.3-inch screens in it, one as an interface for the touch-screen infotainment while the other one replaces the clocks in the instrument binnacle. The interiors of the Coupe also gets the ambient lights which are technically incorporated in every part, even the grab handles on the center console have them. The space in the Coupe has been integrated by just a slight rise to the figures of older GLE Coupe, all thanks to the increased wheelbase. The boot space, however, has only gained a gallon of trunk volume over the current generation of the car, but the volume available with second-row folded flat, the difference between the both comes to 70 liters, and it is the new car that gets the benefit.

The chassis of the Coupe is equipped with a 48v E-Active Body Control System, seen on the standard GLE. The system works in tandem with the adaptive air suspension to dampen or stiffen the individual shock-absorber to improve the car’s dynamic characteristics. With this, the Coupe has variable ride height, and for loading the stuff in the boot, the couple can also drop its lip 50mm down to increase the convenience. The car also goes down to 15mm when in sports and sports+ modes, while in comfort mode the car automatically shed its height once it exceeds the speed of 120kmph. Apart from the electronics add-ons, the Coupe has a slightly tuned chassis, to increase the agility and responsiveness of the car. 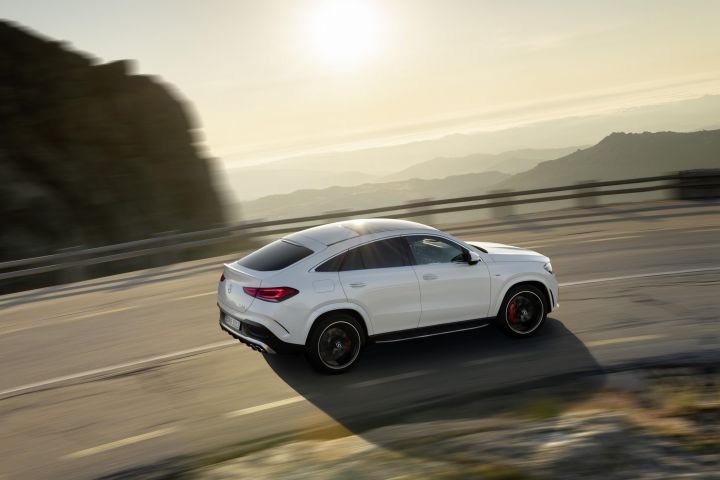 The rear-end and sloping roof of the Coupe gives it an extra wow factor than the standard GLE.

To power the Coupe, Mercedes-Benz has offered 3 engine options as of now, 2 diesels and one petrol mill, all in inline-6 cylinder configuration. The 3.0L diesel engine in base-spec in 350d trim will put out 272hp and 600Nm, while with 400d badging it will put out 330hp and 700Nm. The 435hp 3.0l twin-turbo petrol with 520NM of torque output will be targeted on the enthusiastic buyers with GLE 53 AMG Coupe trim, until the launch of GLE-63-AMG. This will also be coupled to a 48v mild hybrid system, capable to provide an extra dose of 22hp and 250Nm for a shorter period of time