2020 Renault Duster Facelift Revealed, Not to be Sold in India

The new-gen Renault Duster has received a mid-life facelift in Brazil with an updated platform and a range of design alterations.

While India continues to have the first generation of the Renault Duster on sale, several international markets, including that of Brazil, have had the second-gen model available for some time now. In fact, the latest version of the C-SUV has even received a facelift in the Brazilian market. Actually, the French auto company has not only given the Duster some nip and tuck but even updated its platform. The new Renault Duster has received various changes in terms of design.

The carmaker has made so many changes to the B0 platform that it has been given a new name: B0 Plus. Renault has stated that improved chassis has 12.5% higher rigidity with a more robust suspension. The updated Renault Duster also benefits from better sound insulation and enhanced aerodynamic performance. Most of the proportions remain intact except for the length, which has been increased by 40 mm because of the new bumper. The SUV has also receives a new hood, doors, roof and tailgate.

In the design department, the new Duster has been updated according to the automaker's newest design philosophy. At the front, a new grille, newly-designed headlamps and a new bumper with a bold faux skid plate have been added to the mix. The front bumper also accommodates two auxiliary lights but whether these are provided as standard features across all the variants remains to be seen. The rear comes with new LED taillights and an updated bumper. 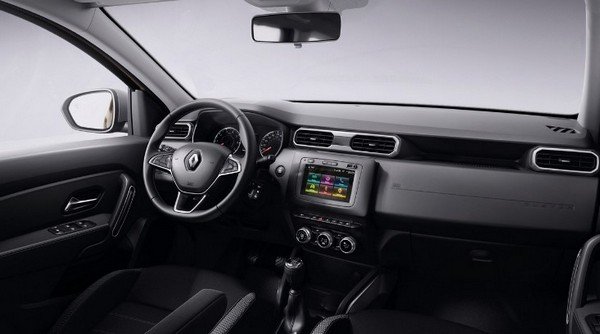 The changes to the interior are much more difficult to notice.

The alterations to the interior are minimal. The touchscreen infotainment system is still located below the central air conditioner vents, which makes the former a little bit out of sight. The 8-inch screen supports a 360-degree camera. The instrument cluster still comes with a wide TFT multi-information display flanked by two large dials.

As regards the mechanical specifications, the 1.6-litre motor, which can generate 118 HP, has replaced the old 2.0-litre engine. Power is sent to the front wheels through a 5-speed MT/CVT. Also, the use of a remodelled hood is said to be necessitated by the addition of a new 1.3-litre turbo motor borrowed from the Renault Captur.