Ford Mustang Mach-E Bookings To Open On May 11

Ford will initiate bookings for the all-new Mustang Mach-E from 11 May 2020. An online electric Mustang group named macheclub.com says that they got the bookings-related information from a Ford dealership. Moreover, one of the group members with the username st00k uploaded some screenshots of the prototype ordering system, which dealers will use to receive the bookings for the 2021 Ford Mustang Mach-E.

Also Read: Ford Mustang Mach-E To Be Launched In India In Two Years 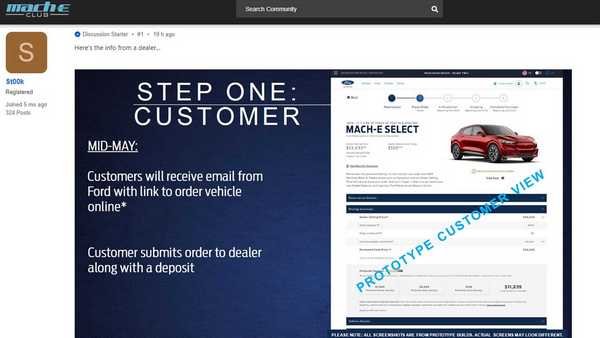 The screenshots also explain the process, which the carmaker will use for sending notifications to the customers directly via email

The screenshots also explain the process which the carmaker will use for sending notifications to the customers directly via email. The emails will be sent out by mid-May, which will contain instructions to book the electric car through a link embedded in the e-mail. From that point, the dealerships will scan the order bank and will approve these submitted orders, which will officially enter company’s data.

It’s not yet clear if the carmaker will be sending these emails to reservation holders or any person who is interested in Mach-E. Ford has plans to retail around 50,000 units of the electric-SUV annually, and the carmaker has already received 40,000 pre-orders. Ford Mustang Mach-E derives power from a standard 75.7 kWh lithium-ion battery and extended 98.8 kWh lithium-ion battery. It comes with RWD and AWD options. The electric SUV will be offered in five different variants, namely- Select (RWD or AWD), California RT 1 (RWD only), Premium (RWD and AWD), First Edition (AWD only) and (GT AWD only). The RWD trim will derive power from a single motor, while the AWD variant will be propelled by two units. The electric car will offer a range between 210 and 300 miles. The power output is between 255 hp to 332 hp, while the torque figures vary from 415 Nm to 565 Nm. Moreover, the electric SUV features LED projector headlights with auto high beam, power-folding wind mirrors, panoramic fixed-glass sunroof and a 360-degree camera.