The 2021 Hyundai Tucson has been spotted testing with heavy camouflage many times before and now, its rendering has been made again.

First launched in 2004, the Hyundai Tucson is now in its third generation. The South Korean automaker gave the crossover a mid-life update earlier this year with a brand-new cabin and enhanced safety technologies. This indicates that a new-gen model will not go on sale at least two years from now.

Commenting on the appearance of the new Hyundai Tucson, Vice President of Styling at Hyundai Design Centre, Sangyup Lee, stated that, if you find the design of the new Venue and Sonata interesting, “you will freak out” when you catch sight of the 2021 Hyundai Tucson. Based on the spy shots, a new rendering of the long-awaited crossover have been made again. The new Hyundai Tucson is going to have a revolutionary design.

According to the new rendering, the new Tucson comes with Hyundai’s signature cascading grille and polishing headlamps which are integrated with LED DRLs in the front. In the rear, the cross over is equipped with a new taillight system with a light bar running along the rear connecting the triangular taillights. The new Hyundai Tucson will witness a breakthrough in terms of design and it remains unknown whether this design can help the SUV popular with the Indian auto customers or not. 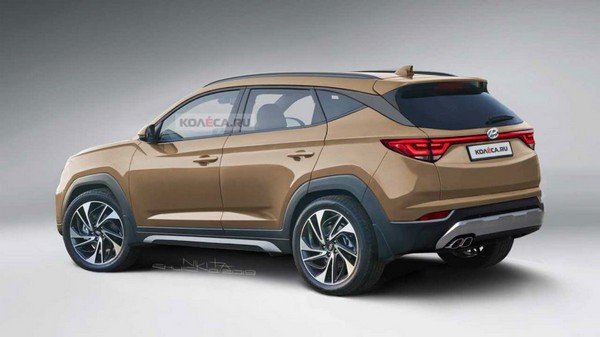 The 2021 Hyundai Tucson will come with a new taillamp system.

No renderings of the crossover’s cabin have been made. Nevertheless, it is expected to get more up-market interiors than the existing model with a wide range of top-notch features. The India-spec Tucson is currently powered by a 2.0-litre gasoline and oil burners which can generate 153 HP/192 Nm and 182 HP/400 Nm, respectively. A 4WD system is offered on the diesel version.

The South Korean auto manufacturer has yet to reveal the price of the new Tucson; nevertheless, it is expected to be priced at a little bit higher price range than the current-gen model, which is priced from $23,500 (INR 16.67 lakh) in the US. The India-bound Tucson is priced from INR 18.76 lakh to INR 26.97 lakh (all prices are ex-showroom).