All New Honda City Among The Safest In Segment, Bags Full 5-Star Rating from ANCAP

The India launch of the 2020 Honda City is expected to happen next month. The new model has bagged a 5-star score in ASEAN NCAP crash tests

The new-gen Honda City has scored 5-star crash test rating at ASEAN NCAP. It’s not the first time that the Thai-spec City has been awarded the highest number of stars at the ASEAN NCAP. The third-gen and four-gen model of the sedan had also scored a 5-star safety rating at these tests in 2012 and 2014, respectively. This should make the latest City among the safest car in its segment. 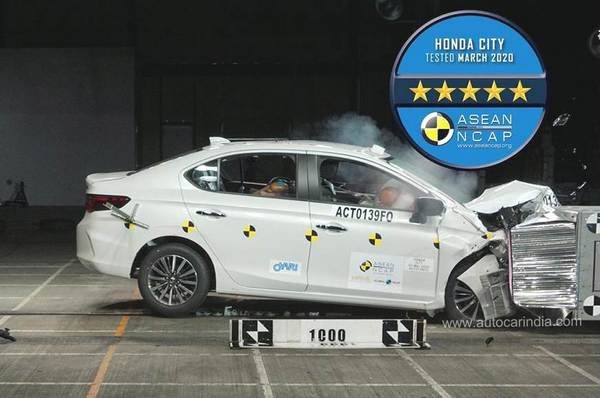 It’s not the first time that the Thai-spec City has been awarded the highest number of stars at the ASEAN NCAP as even the previous two generations of the C2-segmenter have scored well in these tests.

The new-gen Honda city has scored 86.56 points out of 100 in the front and side-impact tests. Furthermore, it has bagged a score of 44.83 for the adult occupant protection (AOP), 22.85 points for child occupant safety (COP) and 18.89 points for safety assist tech (SAT).

The car comes loaded with safety features like six airbags, reverse parking camera, ABS with EBD, hill-start assist, emergency stop signal and vehicle stability assist (VSA). As the new-gen City scored 5-star rating at the ASEAN NCAP, one can expect the C-sedan to perform well at the Global NCAP crash test. In terms of looks, the upcoming India-spec City will look quite similar to the Thai-spec model.

Mechanically, the new India-spec City will derive power from a BS6-compliant 1.5-litre, petrol motor that produces 119bhp of power. The engine will come coupled to a 5-speed MT and CVT. Moreover, the C-sedan will also get a 1.5-litre oil-burner at a later stage. It will produce a power output of 100bhp.

Also Read: 2020 Honda City to be More Powerful than Even Hyundai Verna 1.0 Turbo Once launched, the sedan will rub its shoulders with the likes of 2020 Hyundai Verna, Toyota Yaris and Maruti Ciaz. Also, it may be noted that while the Ciaz bagged a 4-star score in these tests, the Verna and Yaris boast a 5-star rating.

The same diesel engine does duties in the latest-gen Honda Amaze. Honda is also planning to add a 1.5-litre petrol-mild hybrid variant to the lineup. Inside, the new-gen Honda City will come loaded with features like a touchscreen infotainment system, steering mounted controls, ventilated front seats, automatic climate control and much more. Once launched, the sedan will rub its shoulders with the likes of 2020 Hyundai Verna, Maruti Ciaz, Skoda Rapid and VW Vento.