Toyota Kirloskar Motors would soon be discontinuing a total of 7 models from its lineup. With this move, the Glanza will come up as the most affordable offering from the manufacturer.

Toyota is all set to revamp its lineup with BS-6 compliant cars. The manufacturer has recently rolled out the BS-6 updated variants of the Fortuner and Innova. With the updates, the Fortuner continues to retain the 2.8L 4-cylinder turbocharged diesel engine, but the Innova now gets the 2.4L 4-cylinder turbo-diesel only. However, the big news here is the list of products, which would go off the showroom floors. There are a total of 7 models that would go off the production line, and this move will make Glanza the cheapest offering from the manufacturer. Toyota Glanza will be manufacturer's cheapest offering once the BS-6 emission norms kick in.

The 7 models that would be discontinued are Toyota Corolla Altis (Rs 16.45 lakh), Toyota Etios (Rs 5.34 lakh), Toyota Etios Cross (Rs 6.50 lakh), Toyota Platinum Etios (Rs 6.50 lakh), Toyota Prius (Rs 45.09 lakh), Toyota Land Cruiser (Rs 1.47 crore), and Toyota Land Cruiser Prado (Rs 96.30 lakh). After the discontinuation of these 7 models, Toyota will have Glanza, Yaris, Innova Crysta, and Fortuner on sale. To revamp the product lineup, the manufacturer will be launching a set of new cars under the Maruti-Toyota JV. The Toyota-badged Vitara Brezza is going to be the next product under this JV and is expected to be launched anytime around the second half of 2020.

The Glanza was also launched under the Maruti-Toyota JV. The rebadged Maruti Baleno sold as Glanza via the Toyota dealerships will soon become the cheapest offering from the manufacturer. With its ex-showroom prices starting at Rs. 6.97 lakhs, the Glanza will be the most affordable car at any Toyota’s dealership. As of now, Toyota is not planning to launch a car cheaper than the Glanza in the market, thus, it will continue to retain this spot. 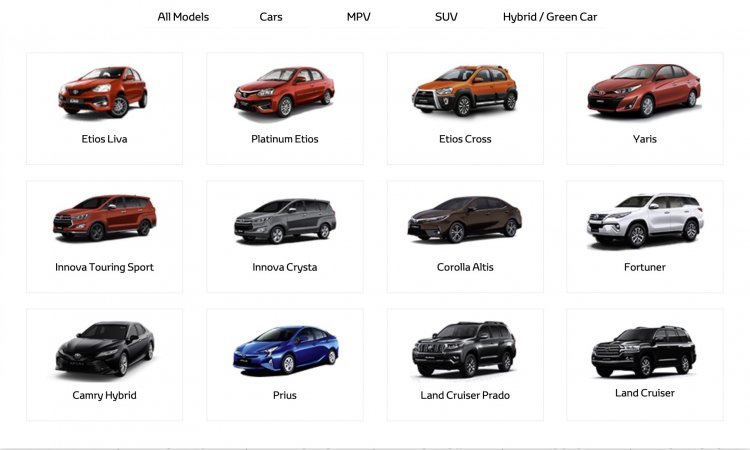 By discontinuing 7 models in total, TKM will have just 4 models on sale.

In terms of powertrain, the Glanza gets the same 1.2L naturally-aspirated 4-cylinder K-Series k12b motor from the Maruti Baleno, which has a peak power output of 83 PS and a max. torque of 113 Nm. It gets two transmission options – a 5-speed MT and a CVT. The top-end variants also get the mild-hybrid tech with an improved low-end grunt.

Being the cheapest offering from the Japanese marque, the Glanza is not shy of being a feature-packed car. It comes loaded with automatic climate control, keyless entry and go with push-button start, UV protect glass, auto-dimming IRVM, automatic headlamps, electrically foldable ORVMs, and a lot more features to match shoulders with the competition.