BS6 Renault Triber Launched In India At A Starting Price Of INR 4.99 Lakh

The BSVI-compliant Renault Triber has been launched in India at a price of INR 4.99 lakh. The MPV is available in four variants: RXE, RXL, RXT and RXZ.

With an attractive design, a high ground clearance, flexible interiors and an aggressive price list, the Triber has proved that it is worth waiting for. The Triber borrows the platform from the Kwid, which means that it shares many features with the hatchback; however, the former also has its own identity with many unique features. 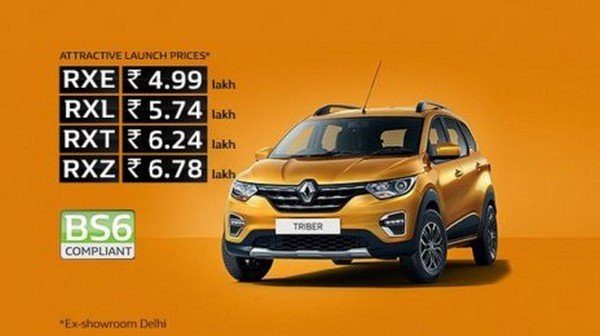 The BS6 Renault Triber has been launched in India at a very competitive price point.

The Renault Triber receives its power from a BS6-compliant 1.0-litre 3-cylinder naturally aspirated gasoline burner which can generate 72 BHP against 96 Nm. The power is spread to the two front wheels through a 5-speed MT. A 5-speed AMT unit is also being developed and is expected to be introduced soon. Moreover, a 1.0-litre 3-cylinder turbo petrol unit is also going to serve as a power source for the Triber. This motor will soon be offered on many Renault models including the Renault HBC. The more powerful turbocharged petrol motor will make the Triber more attractive to the people who prefer more pep on highway drives. Details on the new variants and the motor options will be announced at the 2020 Auto Expo. The Renault Triber has a highly flexible cabin.

The Renault Triber can accommodate up to seven adults with three seat rows. The second and the third seat rows can be easily controlled or removed, making it simple for the occupants to enter the cabin as well as offering a spacious boot space. This flexibility at a very reasonable price list is one of the most unique selling points of the Renault Triber, which helps it attain many family buyers. The addition of the newer variants and the new motors is expected to make the MPV even more appealing.