Datsun redi-GO 2018 will be the right choice if you are looking for a new hatchback with a limited budget. Featured a rich list of features, the redi-GO rises as the next potential player in the segment.

Debuted at the 2014 Auto Expo, Datsun Redi-GO is the next car from the Japanese manufactures to join the Indian market. In the latest update, the new redi-GO offers a new engine option – the 1.0-litre engine which will replace the 0.8-litre engine. IndianAuto.com will give you the full Datsun redi-GO 2018 Review India.

With a funky and strong exterior, redi-GO is definitely the impression-maker. Having distinguishing ground clearance of 185mm, it looks much like what people would say, a tall boy. 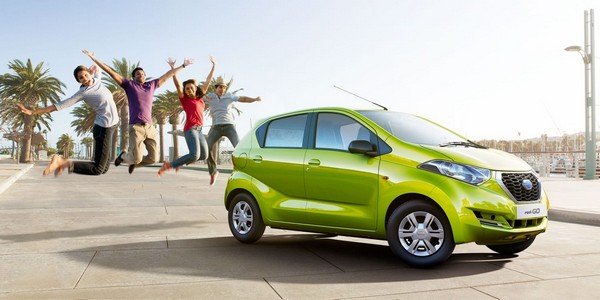 Datsun redi-GO is a smart-looking hatchback

Despite the small size of a hatchback, the front remains to be impressive and aggressive as any other big guys. Right front, the honey-bomb grille strikes a great impression. The swept-back headlamp combines with the chrome-bordered grille emphasizes the aggressive look for the car. In the top-spec variant, the front of the car also features LED daytime running lamp.

To look from the side, the car has a clear layout and a minimal look with little details. There is only one simple line stretching from the front to the rear, creating a smooth transition along the car. The side features simple-looking 13-inch alloys. It is a sensible way to design the exterior for an A-segment hatchback. Despite the front being so stand-out, the rear is simple and neat. The side of the car is simple

For a car of the low-priced segment, we don’t have much to complain about the design of the redi-GO. Indeed the look might be the secret behind the success of the redi-Go.

Step into the car, you can feel the brightness of the interior, which mainly comes from the choice of using beige-grey as the theme color. The redi-GO ATM gets black as the interior color to create the sporty vibe. The plastic dashboard is optimized for practical purposes. There is generous space for storage, including a glove-box, some cubbyholes on the window and cup-holders on the centre console.

The instrument cluster and the head unit is simple and operation-friendly. For example, the instrument cluster comprises of only one blue-illuminated speedometer and a small digital screen displaying needed figures and replacing tachometer. As for the infotainment system, the redi-GO provides standard entertainment features, for example, USB/AUX port as well as CD and FM support for audio playing. However, the wireless connection like Bluetooth or Wifi is not available, which means that you cannot play music from your own mobiles. The power window is exclusively available in the T and S variants. The dashboard of Datsun redi-GO with a simple and practical layout.

Overall, the space inside the redi-GO is acceptable with an adequate knee room and headroom on the rear bench, and the front seat offers decent space for car driver and the front passenger. Regard of the shoulder room, if there are about three occupants on the rear, it might feel a little bit cramped and uncomfortable. Under thigh support is proper. The driver of the taller side might find there is short of space between themselves and the steering wheel even when the seat has been pushed back.

The redi-GO has a boot space of 222 litres, which is much larger than Maruti Alto 800. The interior space of the redi-GO could be listed among the most spacious cars in the segment, comparable with the Renault Kwid.

In the older model, there is only one option for the engine setting. But now, car buyers can choose to have either 0.8-litre or 1.0-litre motor. It is notable that the rediGO and Renault Kwid are created on the same engine and transmission setting, which explains why the two cars share some common traits in terms of performance.

The 0.8-litre engine could generate the power of 54 PS and the torque of 72Nm. The power figure might be humble for a car of its segment. But the power delivery is not the cornerstone of this model. Instead, it is engineered to optimize the fuel consumption. If your car is more likely to involve short-drives and straight route, the redi-Go could still offer a satisfying performance and an incredible mileage of 22.7kmpl.

The 1.0-litre engine could provide a higher power figure of 68PS and the torque of 91Nm. The power delivery, however, doesn’t seem to live up to the expectation. For example, it falls short at descending or with full occupancy.

Generally, the new 1.0-litre motor scores better the 0.8-litre engine in terms of performance. The power delivery is more linear, feels smoother at acceleration. Moreover, the NVH level is much better in bigger engine variants, but there is a certain level of vibration inside the cabin. The mileage of the 1.0-litre redi-GO is not inferior to that of the 0.8-litre. The driving process is supported by a light clutch and a light gearstick, allowing easy operation. However, they don’t bring in a highly-accurate control. With the automatic transmission option, it allows easy commutation within the city.

Despite sharing the same engine and gearbox setting with the Renault Kwid, the redi-GO possess a new suspension system. The suspension set-up of the car allows better ride quality. Bumps or potholes doesn’t seem to intervene the comfort inside the car. Handling is not the strong point of redi-GO, especially with the cornering. It does feel understeering and falls short when tackling with U-turn. Braking requires forces and stronger pushes.

The price range starts from Rs 2.5 lakh and goes up to Rs 4.06 lakh. There are five variants available, which are D, A, T, T(O) and S. The base variant goes without the air conditioner, power steering, and immobilizer.

Competitors of Datsun redi-GO include Renault Kwid, Datsun GO, and the Maruti Alto K10. Datsun redi-GO offers a competitive price as well as an excellent fuel efficiency that worth considering if you have a humble budget.