19 0
Once launched in August 2019, the Hyundai Kona Hybrid will be another version in the Kona lineup along with the ICE-powered Kona and Kona Electric

The Kona sources its name from the picturesque Kona District on the Big Island in Hawaii. The regular version of the SUV was first launched in Europe in 2017. Following that is the introduction of the Kona EV, which is the company’s first-ever fully electric compact SUV to be available in Europe. Since then, this EV has recorded a sales number of nearly 120,000 units of this EV. Next is the Hyundai Kona Hybrid, which has just been revealed in the European market.

Commenting on the revelation of the vehicle, Product and Marketing Vice President of Hyundai Motor Europe, Andreas-Christoph Hofmann stated,

“Hyundai already offers the widest range of powertrains, and with the launch of the all-new Kona Hybrid we are offering our European customers even more choice when it comes to eco-friendly SUV models. In addition to its stylish design and efficient hybrid powertrain, customers can now also enjoy cutting-edge connectivity features.”

To be more specific, the hybrid version of the Hyundai Kona bears a strong resemblance to the other ones with Hyundai’s signature cascading grille, LED headlights and optional 18-inch rims besides the standard 16-inch ones, which are among the most outstanding exterior features of the vehicle. The hybrid SUV is also available with 26 distinctive colour combinations. The Hyundai Kona Hybrid features a similar exterior design as the regular version.

In commitment with what the Vice President has said, the Hyundai Kona features a modern cabin with a wide range of cutting-edge features which include the Blue Link system, which can also be found in the recently launched Hyundai Venue. Other differences from the regular version include an optional white-and-black dual-tone colour paint scheme. A 10.25-inch automotive navigation system which is integrated with ECO-Driving Assist System is available to enhance the fuel mileage. Moreover, other convenience features like heated driving wheel, 3-step heated seats and 3-step ventilation are also provided. 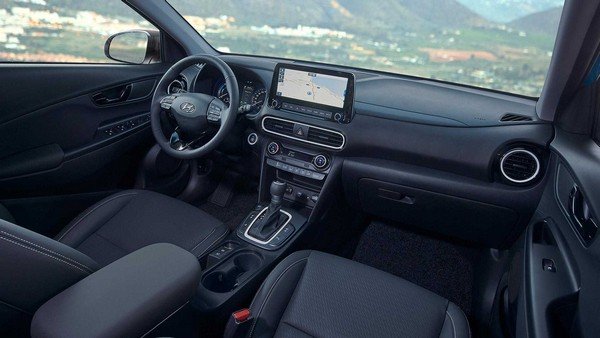 The cabin of the hybrid version is equipped with a wide array of top-notch features.

The SUV also ensures both the driver and the passengers a safe journey with a wide list of safety features. These include front collision avoidance and warning which is provided as standard features while there are also some other optional safety features like intelligent speed alert, lane following assist, etc.

The Hyundai Kona Hybrid keeps under its hood a 1.6-litre petrol motor which produces a maximum power of 105 PS and a peak torque of 147 Nm. Combined with the hybrid technology, the total output amounts to 141 PS against 265 Nm. It is claimed by the South Korean automaker that the SUV can reach a speed of 100 kmph in just about 11 seconds and a maximum speed of 160 kmph.