Farhan Akhtar and Shibani Dandekar were spotted driving in a Mercedes GLS 350d amidst the lockdown for some grocery shopping.

Due to ongoing unfavourable situation, the Government of India has currently enforced a nationwide lockdown and advised citizens to exercise social distancing. Still, all essential services are active and people in most areas can step out to buy supplies and household items. Actor and Singer Farhan Akhtar was spotted driving on the streets of Mumbai in his Mercedes GLS 350d amidst the lockdown. Farhan, along with singer girlfriend Shibani Dandekar, had stepped out of home for some grocery shopping. Paparazzi spotted the couple wearing masks and gloves as a precaution. This was a smart move by the two, as minimising contact with other humans helps contain the spread. The couple had been shopping for household supplies, and can be seen carrying bags of kitchen rolls, cleaning liquids, and bag full of snacks! They were later also spotted delivering some of those snacks to Shibani’s sister, Anusha.

The car Farhan was driving around was a Mercedes GLS, the largest SUV by the German luxury carmaker till date. This particular model is a GLS 350d, which costs upwards of a whopping Rs. 1.02 crore (ex-showroom, New Delhi). It is powered by a 3.0-litre turbocharged V6 diesel engine. This motor is capable of generating 260 PS and 620 Nm of maximum power and peak torque, respectively, and comes paired to a 9-speed automatic gearbox (dubbed 9G-Tronic plus). Power is transferred to all four wheels via Mercedes’ 4MATIC system, and the SUV also features AIRMATIC suspension for optimum on-road comfort and brilliant off-road performance. 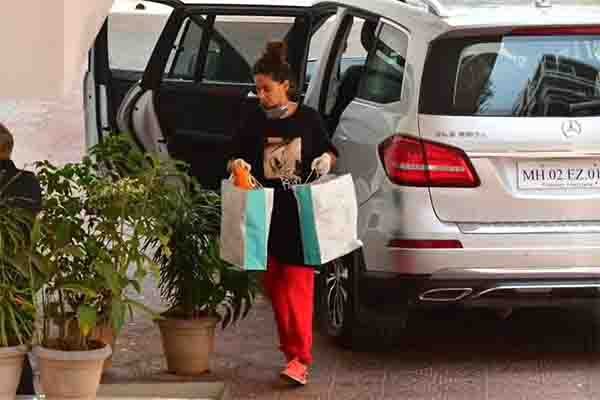 Other than a Mercedes-Benz GLS 350d, Farhan Akhtar also own a couple of other exotic cars. These include a Porsche 911 GTS and a Jeep Grand Cherokee. The latter was gifted to him by FCA India as a part of their promotions strategy. The company had also given the some vehicle to other Bollywood celebrities like Akshay Kumar and Saif Ali Khan.