90 0
The Ford Aspire Blu Edition commands a premium of Rs 25,000 over the mid-spec Titanium variant.

The special edition of the Ford Aspire compact sedan, christened as the Aspire Blu has been launched in India, shortly after we spot the new iteration at a dealer’s stockyard just a few days back. Based on the respective Titanium trim, the sporty variant of the Ford Aspire costs around Rs 7.51 Lakh for the petrol and Rs 8.31 Lakh for the diesel options that means it commands an Rs 25,000-premium over the Aspire Titanium variant. 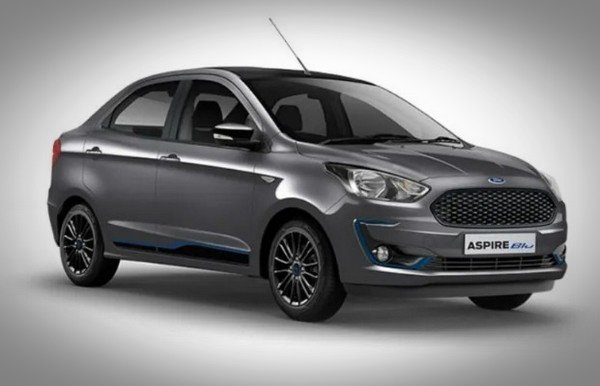 The sportier variant of the Ford Aspire badged the Blu has been launched at Rs 7.51 Lakh in India.

Unlike the recently-launched Ford Figo facelift elder brother, the Ford Aspire Blu has been made available as a limited-run cosmetic package, not a top-spec trim on the compact sedan’s lineup. The new model features a bucketful of styling updates that take huge inspiration from the Figo Titanium Blu. It gets a C-shaped design with blue highlights on the bumper, the black-finished mesh grille, black roof, 15-inch black-finished alloy wheels design as well as the blue inserts and body graphics running to the length of the door bottom and the boot.

The Ford Aspire Blu sports a handful of cosmetic highlights compared to the outgoing model.

The “Blu” treatment continues to inspire the interior of the new Aspire Blu such as blue-garnished seats, blue stitching and blue inserts on the inside doors. The all-black interior theme with blue accents is kitted out to take up space of the standard dual-tone beige-black the interior colour scheme on the regular version. The equipment list of the Ford Aspire Blu seems identical to that of the Titanium variant which it’s based on. It gets the same features like a 7-inch touchscreen infotainment system with Bluetooth and navigation, engine-start push-button, auto AC vents, steering-mounted controls and reverse parking camera among others. However, unlike the range-topping Titanium+ trim which houses a 6.5-inch infotainment system with Ford’s SYNC 3 exclusive, the Aspire Blu’s 7.0-inch unit misses out on the Android Auto and Apple CarPlay supports.

Under the bonnet, the new Aspire Blu comes with a similar powertrain system as the regular model. It offers a 1.2-litre Ti-VCT 3-cylinder petrol engine putting out 96 PS of power and 120 Nm of torque, and a 1.5-litre TDCi diesel engine pumping out 100 PS per 215 Nm units. The gasoline version is claimed to return a fuel mileage of 20.4 km/l while the oil burner can deliver a fuel efficiency of 25.5 km/l.