Ford Figo is one of the best performance-oriented small cars we have in India. It may be just a tiny hatchback, but its lightweight body, good dynamics and powerful engine make it a fun-to-drive vehicle. Also, the little Ford is a great canvas for auto-enthusiasts to work their customisation magic on. The car seen in the images below is an example of this. 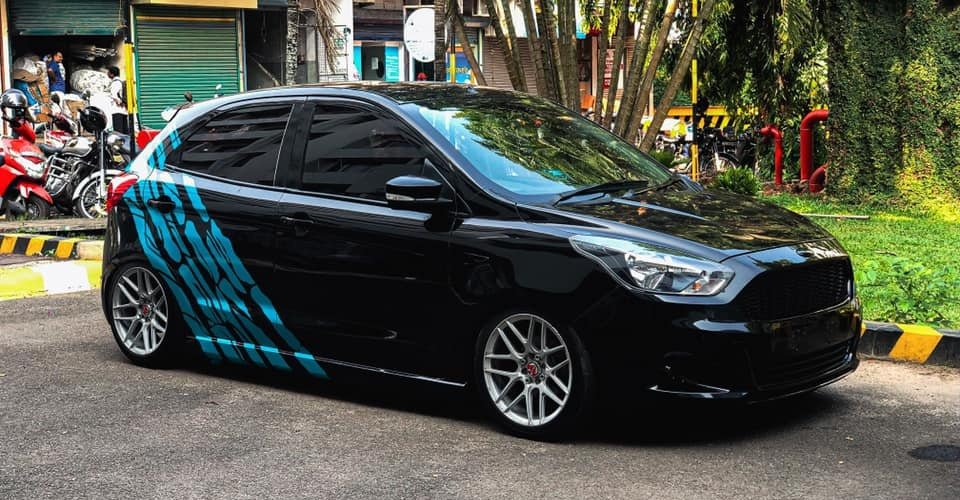 These images, which have been posted by one Althaf Kattakath on Facebook, show India’s first bagged Ford Figo. If you’re wondering what that means, well, here’s the simplest explanation- A bagged car is simply one that features air suspension. This type of suspension alloys for a car’s ride height to be changed on the fly. Being bagged, however, isn’t the only change on this Figo. The lowered stance of the car is complemented by custom 16-inch wheels with 205/45 rubber. Its gloss black exterior and blue vinyl on the rear three-quarter of the car also add a premium yet sporty touch.

Also Read:Modified Hyundai Elite i20 With Gold Wrap and Sporty Body Kit is a STUNNER This particular car is the diesel-powered version of the pre-facelift Figo, powered by a 1.5-litre TDCi motor. It is capable of generating 100 PS and 215 Nm in stock form. This car also features a custom air intake from BMC, so there is surely some additional horsepower under the hood. The gearbox of the car is a slick-shifting 5-speed manual unit. Needless to say, the car looks absolutely marvellous and would surely be a blast to drive. In fact, it wouldn’t look out of place in a racing videogame, like perhaps Need For Speed: Underground!

Ford Figo is currently available with two engine options- a 1.2-litre naturally aspirated petrol and a 1.5-litre turbocharged diesel. We’ve already discussed the latter above. The petrol unit generates 96 PS and 120 Nm of max power and peak torque, respectively. Both these engines are BSVI compliant. There was also a 1.5-litre petrol on offer earlier, with 123 PS and 150 Nm. It was only available with a 6-speed automatic gearbox. Although it was the most powerful engine in its class, it was discontinued earlier this year due to poor consumer demand.