29 0
Sales of the Ford Freestyle have witnessed a huge dip of 75 per cent last month compared to that of May 2018.

The Ford Freestyle which was launched back in April 2014 has been on the slide of its popularity stakes. The Figo-based crossover registered only 743 sales units last month which posts a colossal 75% decline as compared to a pretty healthy figure of 3,027 units in May 2018. The Ford Freestyle has been on sale in India for over a year but now it is losing out its popularity amongst the market.

Even in April 2019, the Ford Freestyle was retailed at 1076 units thereby registering a sales dip of more than 30 per cent, in the month-on-month sales. Clearly, this should be a serious matter of concern for Ford India which has been losing out its popularity rapidly in recent times.

As of now, none of its models including the Ford Figo, Aspire, Endeavour and Ecosport has scaled the height of the monthly sales chart. In fact, the Ford Ecopsort once a highly popular model at a time is now failing to outsell the chart-topping Maruti Vitara Brezza, Mahindra XUV300, Tata Nexon or even the recently-launched Hyundai Venue. 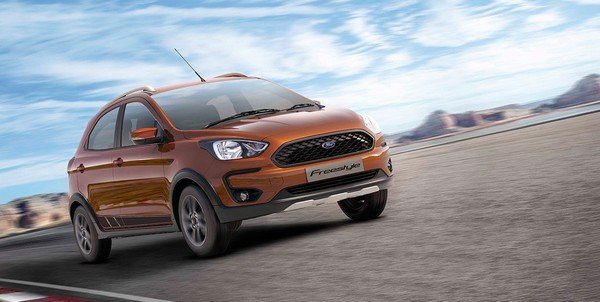 The Ford Freestyle witnessed a decent sales slump of 75 per cent on the year-on-year basis.

Back to the Ford Freestyle, the Freestyle cross-hatch currently competes with the likes of Volkswagen Polo or the Toyota Etios Liva in India. Based on the Figo hatchback, the Ford Freestyle looks a bit different from the donor model by a host of crossover identities such as a more rugged silhouette, metallic roof rails, sportier bumpers, black plastic body cladding, etc.

The Ford Freestyle also features a bigger proportion compared to its Figo brother. It measures 3,594 mm long, 1,737 mm wide, 1,570 mm high along with the wheelbase of 2,490 mm. The cross-hatch offers six body colour options including Caynon Ridge, Moondust Silver, Smoke Grey, Absolute Black, White Gold and Oxford White. Powering the Ford Freestyle is a 1.2-litre 3-cylinder petrol engine that churns out 96 PS of max power and 120 Nm of peak torque along with a 1.5-litre oil burner making a max power of 100 PS and 215 Nm of torque.