Here's What The Upcoming Toyota-badged Maruti Ertiga Could Look Like

Toyota plans to launch a rebadged Maruti Ertiga in the future, like the Toyota Glanza, which is a derivative of the Maruti Baleno, it would have only minor styling changes

Most of you would know that Toyota and Suzuki have signed a partnership agreement that would, among other things, see the two manufacturers sharing some of their vehicles not just in India but also abroad. Both the companies have now collaborated to offer new products for the domestic and international markets.

The Japanese car companies have taken this to explore opportunities in different fields, including vehicle sharing, hybridisation and electrification as they look to take advantage of each other’s strengths. If we talk about the strengths of these companies, Suzuki’s India division has sufficient support for local manufacturing and it is something which will give Toyota an advantage over other manufacturers. On the other hand, Toyota will help to develop hybrid electric vehicle technologies through local procurement of HEV systems, engines, and batteries. Moreover, the RAV4 and Corolla Wagon EVs will be supplied to Suzuki in the European markets. 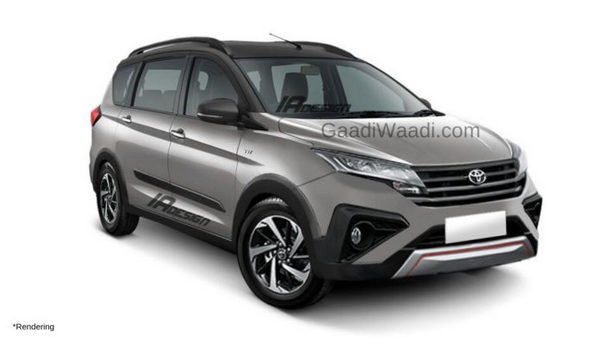 We expect that the forthcoming Toyota MPV will derive power from a BS6 compliant engine.

We have already shown the leaked images of the Toyota badged Toyota Glanza, which is basically a rebadged Maruti Baleno. The only difference you may find in the car is the employment of Toyota badging and a revised front grille. Now Toyota has decided to launch the Ertiga MPV under Toyota nameplate. The change you may expect in the upcoming MPV is, again, the usage of the Toyota insignia and a revised grille. Maruti Suzuki launched the new-gen Ertiga in November 2018. The new-gen MPV gets some serious cosmetic upgraded on the outside and on the inside. Moreover, the new-gen Ertiga gets propelled with the help of a newly developed 1.5-litre SHVS petrol engine.

Ertiga also gets powered by a 1.3-litre diesel powertrain and its future is quite doubtful. We expect that the forthcoming Toyota Ertiga will derive power from a BS6 compliant engine. Like Toyota Glanza, the company could sell the rebadged Ertiga in selected high-spec variants. A standard warranty package of more than two years makes the Glanza different from the Maruti Suzuki Baleno. Moreover, Toyota is also working on a C-segment MPV which is also being co-developed with Suzuki and, it will compete against the likes of Mahindra Marazzo and Tata Hexa.