A Mumbai-based businessman gets his Mahindra TUV300 modified from Mahindra Customisation and gifted it to his wife.

India’s largest UV maker 'Mahindra' produces SUVs in varying shapes and sizes. The carmaker also offers a lot of customization options for its SUVs, which are modified officially at the manufacturer’s in-house modification shop – Mahindra Customisation. The in-house modification vertical of the carmaker has served the riches of India with some of the most purposeful vehicles ever. The Thar Daybreak was also a product of the Mahindra Customisation. Today, we came across a video uploaded on YouTube on the official channel of Mahindra TUV300 that shows a customized vehicle bought by someone for his wife.

The video shows the complete story of how a Mumbai-based businessman – Kapil Sanghvi got his TUV300 modified from Mahindra Customisation and gifted it to his wife Mansi Sanghvi. The customisation house once modified a Bolero with a chopped-roof, giving it a pickup truck like silhouette and was named Bolero Stinger. Same has been done here. Thus, the car is named as TUV300 Stinger.

It wears a shade of Olive Green with a matte finish. The car gets a heavily revised front-end with a custom bumper, grille, and skid plate. The grille is reinforced with 3 mm thick steel plating; however, we are yet to find out for what reason it has been done so. From the side, it is evident that the car has been chopped-off after the C-pillar to give it a pickup truck like silhouette. It also gets roof marker lamps and different design for the alloy wheels. The tyres are chunkier as well and to accommodate them it gets custom-made wheel arches. There are running boards too, which would serve the purpose of rock sliders if the situation arises. 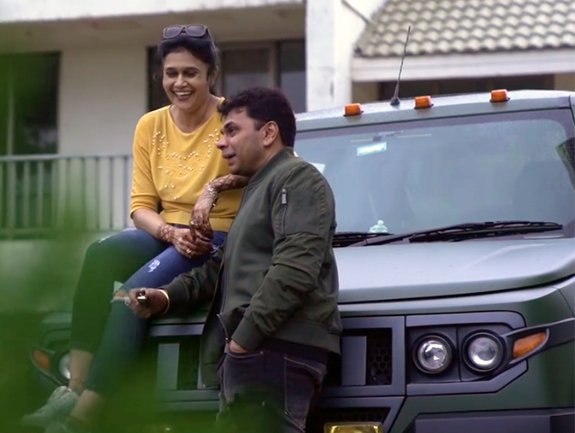 The customised Mahindra TUV300 boasts of some massive road-presence.

On the rear, the car continues to get the spare wheel on the tailgate. To keep the sturdiness of the body in check, it gets roll-bars on the rear bed. Inside the car, the ambience is spruced up in a nice fashion. The interior is done in black leather with olive green inserts all around. The steering wheel and gear knob are also leather-wrapped in the same shade as the upholstery. However, the nicest bit about this complete mod job is the level of quality assurance you get, since the job is performed by the OEM itself. These fit and finish levels are generally a notch higher than the third party modifiers.