Hyundai has confirmed the launch date of the Hyundai Aura. The new sedan will be an alternative to the Hyundai Xcent.

Previously, it is confirmed that the Hyundai Aura will make its debut in the market on 21 January 2020. Hyundai Aura is said to be the replacement of the Hyundai Xcent; however, it is now revealed that even after the launch of Hyundai Aura, the Xcent still retails but only as a fleet vehicle option.

Also Read - Hyundai Aura Revealed, Will Go On Sale In First Quarter Of 2020

It is widely known that the Aura is the four-door sedan version of the Hyundai i10 Grand Nios. In general, the Hyundai Aura will take up both engineering and design from the hatchback. On the front end, it might take experienced eyes to tell the difference between the Aura and the Grand i10. That being said, some slight modifications include a revised bumper, new rectangle fog light housing, and a radiator grille with a new pattern. The major difference takes place from the C-pillar toward the rear end. Hyundai Aura will look essentially similar to the Grand i10 Nios

On the unveiling event, the interior is not unwrapped yet. However, there is not much room for imagination since most parts of the interior will be duplicated from the Grand i10 Nios in order to be more cost-effective. It also means that the Hyundai Aura is like to inherit the dashboard setting with an 8-inch touchscreen with Apple Carplay and Android Auto compatibility, and part-digital-part-analogue instrument cluster. Besides, some features might also make their way to the upcoming Hyundai Aura are rear AC, wireless charging, Arkamys audio system, rear camera, and rear centre armrest. Even though overall, the Hyundai Aura seems to be well-equipped, it is unlikely that Hyundai will provide it with the latest BlueLink connectivity system which has been used on the Hyundai Venue. Instead, it is most likely to be set with the iBlue Audio remote application. 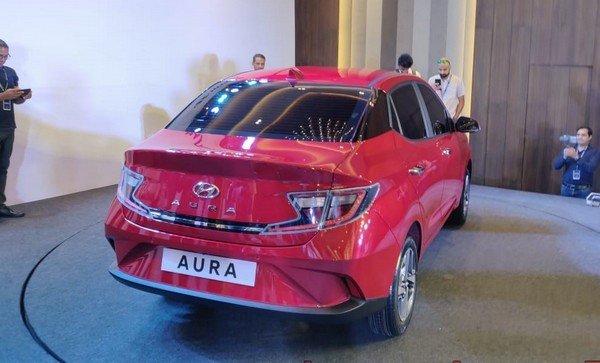 Under the hood, Hyundai Aura is expected to get three engine options. Two of these will be sourced from the current Hyundai Grand i10 Nios, a 1.2-litre naturally aspirated petrol and a 1.2-litre turbo diesel engine. While the former is good for 81PS of maximum power and 114Nm of peak torque, the latter can churn out a 74PS and 190Nm. These engines share the same gearbox options, a 5-speed manual transmission and a 5-speed AMT unit. Apart from Nios’s engines, the Aura also comes with another 100PS 1.0-litre turbo petrol engine, increasing the number of petrol options to two. This engine is available with a 5-speed manual transmission only. Hyundai Aura will compete against the likes of Maruti Dzire, Honda Amaze, Ford Aspire, and Tata Tigor.

To get the latest updates on the automobile industry, visit us at IndianAuto.com.