Hyundai has a big plan to electrify its product range. Its electrification journey in India starts off with the launch of the Hyundai Kona. In the future, the South Korean carmaker will introduce a couple of new EVs in the international market as well as the India market. In the upcoming Frankfurt Motor Show in September, Hyundai will take the wrap off its new EV concept. Ahead of its first appearance, Hyundai recently dropped a teaser image capturing the rear end of the new EV concept called the 45.

The latest teaser hints at a vehicle with notchback or fastback body type. A gif teased by Hyundai also shows how the LED bar runs across the rear end and resolves into the two taillights. 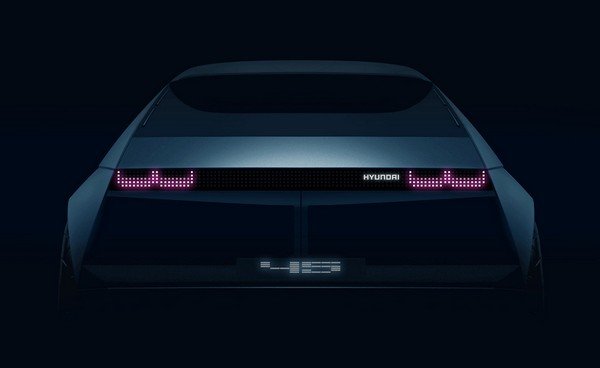 According to Hyundai, the design of the new concept is influenced by the car maker’s first export and mass-manufactured model – the Pony. With this battery-powering vehicle, Hyundai will continue to push the “Style Set Free” strategy which gives a strong focus on the idea of  highly personalized and customizable vehicles. Previously, Hyundai has demonstrated this idea through the Hyundai Elevate Concept. The 45 Concept will be at the frontier of this campaign. Moreover, Hyundai is planning to expand this idea beyond automobile world and influence how people interact with objects in general. By far, these are all we know about the 45 concept. Details of the new EV concept is limited to date. Earlier, Hyundai has embarked on the electrification revolution with the launch of the Hyundai Kona, its first EV in the India market. The price of this zero-emission vehicle starts from Rs 23.71 lakh and goes up to Rs 23.91 lakh. On the global market, it comes with two electric motor options including a 100kWh motor and a 150kW electric motor. The former derives power from a 39KWh battery pack while the latter stores power with a 64kWh battery pack. For the India market, Hyundai only introduces the less powerful electric drivetrain which features a range of 452 km for one charge.

Alongside the electric concept car, Hyundai will also bring the new i10 as well as its first electric sports car to the Frankfurt Auto Show. IndianAuto will keep you updated with the latest car news.