0 0
It has been officially announced by Chung Euisun, Vice Chairman, Hyundai India that Nexo Fuel Cell SUV will be released into the Indian market.

Although the Nexo Fuel Cell SUV is certain to be launched in Indian auto market by Hyundai, the timeline of the launch has not been revealed by the Korean car maker. But it could occur by the end of 2020. The Nexo

is now currently been sold in the South Korean auto market.

Hyundai has announced that it is intending to launch 38 clean vehicles before 2025, and the new Nexo is part of the plan because the only things the vehicle needs to operate are air and hydrogen. This plan also conforms to the Indian government’s policy for clean cars.

A hydrogen fuel cell gives power to the Hyundai Nexo, which makes it lighter than the normal electric vehicles which are powered by batteries. This cell can deliver around 161 Bhp and 400 Nm of peak torque. The Nexo SUV is equipped with three fuel tanks in which 156 litres of hydrogen is held and can reach a rage of 595.5 kilometres as per the US Environmental Protection Agency range rating for electric vehicles.

Moreover, the Nexo can reach 100 kph from a stop for just 9.2 sec and the peak speed is 177 kph. We often have to spend up to thirty minutes to charge the battery of EVs, even the most advanced ones, but the hydrogen fuel tank of the new Nexo can be filled in just several minutes. 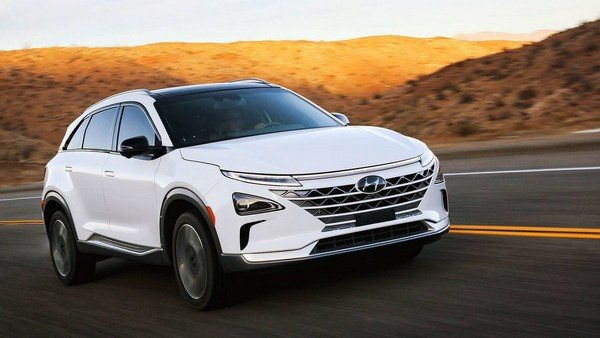 As regards the exterior, like other Hyundai cars, the Hyundai Nexo is built based on the robust and sharp Fluidic Design 2.0 design idea. The front end is equipped with shiny angular LED headlamps. The auxiliary lights are located under the headlamp. The rear end gets the Nexo name tag below the Hyundai logo and triangular taillights. In terms of the interior, on the dashboard, twin displays totally measuring 12.3 inches are present. Whereas some specifications such as the range, efficiency and speed are shown on one display, infotainment and connectivity options are exhibited on the other. Safety features of this vehicle include

Along with the Nexo, the Hyundai is also going to introduce another EV to India, the Kona Electric SUV India, which will be officially debuted in 2019 and imported to the country as a CBU.