0 0
Hyundai just introduced Hyundai Santro Anniversary Edition to celebrate one year of the Hyundai Santro. The new Santro is priced at Rs 5.12 lakh and Rs 5.75 lakh for the manual and automatic gearbox version.

The launch of the Hyundai Santro was one of the biggest launches last year. This hatchback made a successful comeback in the Indian market after one decade of discontinuation. It has taken the market by storm and become one of the best-selling hatchbacks in the market. On average, Hyundai has sold around 5,000 units of Santro per month. In Hyundai’s line-up, the Santro is now the lowest-priced model in replacement of the Hyundai Eon. To celebrate one year anniversary of the new Hyundai Santro, Hyundai has introduced a special edition of this hatchback. The price of Hyundai Santro Anniversary Edition is rated at Rs 5.12 lakh. This special edition is based on the Sportz grade but with some distinctive updates.

Exterior wise, the anniversary edition is added with new black-out elements on the wing mirror, door handles, and roof rail. Besides, the Hyundai Santro now comes with plastic cladding on its side profile. On the rear end, the tailgate is adorned with chrome accents. It also bears a new anniversary edition badge in place of the regular Hyundai logo. On the inside, the anniversary edition remains the all-black colour scheme but this time with blue highlights around the centre console. The rest of the interior stays the same. 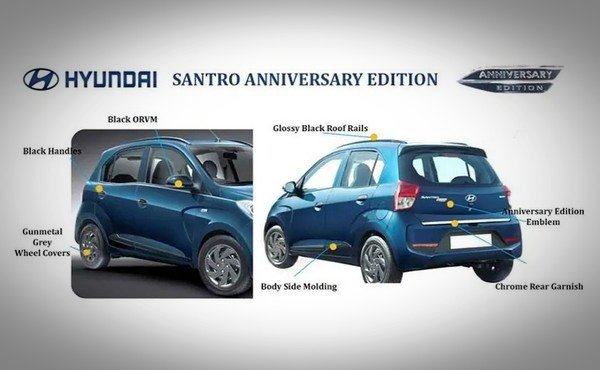 Hyundai Santro Anniversary Edition shares the same mechanical setting with the regular model. It is powered by a 1.1-litre 4-cylinder petrol engine with a maximum power of 68 Bhp and 99 Nm. This engine is paired with either a 5-speed manual transmission or an AMT option. The price varies depending on the transmission type it gets. While the manual version is retailed at Rs 512 lakh, the AMT version is sold at Rs 5.75 lakh. Booking for the anniversary edition Santro is available at Hyundai’s dealerships across India. The delivery of the Santro will be commenced soon. For now, Hyundai only offers the petrol engine for the Santro. Customers can also choose to get a CNG-petrol version which is on sale for some selected cities in India.

It is expected that Hyundai will soon update the Hyundai Santro to meet the upcoming BSVI emission norms. A slight price hike is predictable. Recently, the price of the regular Hyundai Santro starts from Rs 4.15 lakh and can go up to Rs 5.75 lakh. To get more car updates, visit Indianauto.com.