0 0
An executive of Kia's Panvel dealership accidentalty drove-off the Kia Sletos from the first floor to another customer ready vehicle.

Earlier, a video surfaced over the internet where a customer drove her Hyundai Elite i20 through the showroom glass walls, damaging the dealership as well as the car. Now we have got some new images regarding a similar incident which took place at the Kia dealership in Mumbai. A few images of this incident have been shared over the internet, where a Kia Seltos has fallen from the first floor of Kia Panvel dealership. This accident happened as one of the dealership executives tried to park the display vehicle. Yet, instead of placing the gear lever into the reverse, he mistakenly shifted the gear forward and ended up driving off the dealership floor. 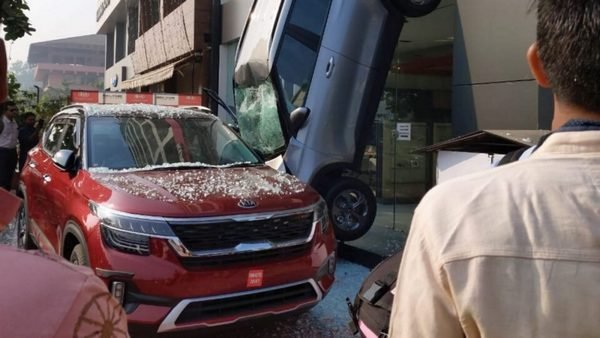 The matter got worse when that car hit another Kia Seltos which was parked outside the showroom. Another Seltos involved in this incident appeared to be a customer-ready vehicle. One can see in the pictures that the accident is so critical that the driver side airbags deployed. While the red coloured Kia Seltos suffered from a harmed C-pillar and roof. This incident at the Kia dealership is a clear case of complete carelessness by dealership executives and we’re happy that no one has seriously got injured.