Kia’s upcoming sub-compact SUV has been spied once again, this time in South Korea. In the pictures, we can see the design of the new crystal cut alloy wheels.

New spy pictures of the upcoming Kia Sonet have surfaced online. The upcoming sun-4-metre SUV can be seen wearing full-body camouflage and a set of shiny new alloy wheels. A similar wheel design will also be sported by the upcoming next-gen Hyundai Creta. 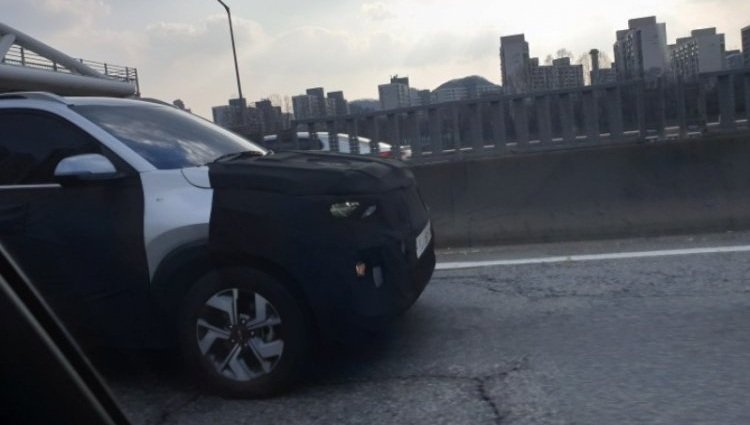 In the picture above, we can clearly see the Kia Sonet with sporty yet classy looking, 16-inch, dual-tone alloy wheels. These will only be available on the top variants, with the base trims making do with steel wheels and wheel caps. Apart from that, we can also see a glimpse of the new headlamps and the outline of the company’s signature tiger-nose front grille. In another picture, we get a shot of the rear angle of the test car, in which the new LED taillamps are visible. Not many other details can be made out here, on account of the camouflage that aggressively hides the bodywork. Thankfully, we already know a lot of details about the car.

Also See: Have You Checked Out the TVC for Kia Sonet? [Video]

Codenamed Kia QYi, the upcoming Sonet SUV is expected to borrow its platform from the Hyundai Venue, as well as the engines and gearbox options. There will three engines on offer. The first one is a 1.2-litre naturally-aspirated petrol capable of producing 83 PS of max power and 114 Nm and peak torque. The second one is a 1.0-liter turbocharged petrol motor offering 125 PS and 172 Nm. The third engine option is a 1.5-liter turbocharged diesel mill with 100 PS on tap. A near-production model of the Sonet was spied earlier during road test in India, hinting at a launch near the end of the year or early next year.

Also See: More Than Rs 2.5 Crore Worth Kia Carnival MPVs Sold By a Dealer in a Day

The production version of the Kia Sonet is expected to feature  LED headlights and DRLs, LED taillights, 10.25-inch touchscreen infotainment system, rear AC vents, ambient lighting, air purifier, ventilated front seats, Bose sound system, and smart car connectivity.  There has no hint at pricing, but we expect this Kia SUV to be priced in the same range as (or be slightly more expensive than) the Hyundai Venue. Apart from the Venue, the Sonet will compete against Maruti Vitara Brezza, Mahindra XUV300, Tata Nexon, and the upcoming Renault subcompact SUV.