Kia Sonet Spied on Test, Will be Based on Hyundai Venue

Hyundai Venue based upcoming compact SUV Kia Sonet spied on test in South Korea. The car is expected to be launched in India around August 2020.

Kia Motors is betting big on cars like the Seltos and Carnival. The brand has been performing quite well in the Indian market with just 2 products in its lineup. However, the third product from the carmaker for the Indian market is going to be the Kia Sonet, which was recently unveiled at the 2020 Auto Expo in its concept form. The production-ready prototype of the same has been spied recently on public roads near Hyundai’s production facility in South Korea. 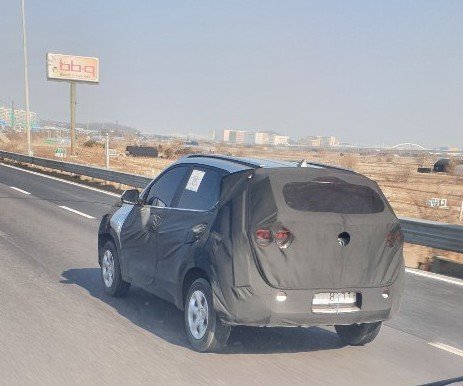 THe production-spec Kia Sonet will look identical to the concept unvieled at the 2020 Auto Expo.

Kia Sonet is going to be a sub-4m compact SUV. Thus, it will share the same platform as the Hyundai Venue. The engine options are also expected to be common between the two cars. The sub-4-metre SUV is expected to come with 3 engine options- a 1.2L 4-cylinder N/A Kappa engine with a rated output of 83 PS and 114 Nm, a 1.0L 3-cylinder turbocharged petrol motor with a peak power output of 120 PS and max. torque of 171 Nm, and a 1.5L turbo-diesel engine with max. power output of 100 PS and 200 Nm of peak torque. The transmission options are expected to comprise of a 5-speed manual and a 7-speed DCT for the petrol variants, while the diesel variants are expected to be offered with a 6-speed stick shift and a 6-speed torque-converter based automatic transmission.

In terms of looks, the production version of the Sonet will do with a lot of styling elements seen on the concept car. It will get all-LED headlamps with Tiger Eyelline LED DRLs, ice-cube LED fog lamps, connected tail lamps, and 16-inch alloy wheels on the outside to have an uncanny resemblance to the concept version of the car. On the inside, it will feature an electric sunroof, ventilated front seats, Bose sound system, grab rails on the centre tunnel, and a 10.25-inch touchscreen unit with the support of Android Auto, Apple CarPlay and OTA updates.

This mechanical twin of the Kia Venue is expected to be launched with a starting price of Rs. 7.00 lakhs (ex-showroom India) in August 2020. However, Kia will soon begin with the car’s production at its facility in Anantapur, Andhra Pradesh. In all likelihood, the new model will be slightly costlier than the donor vehicle.