Maruti Ciaz, the Popular Honda City Rival in India, To Get DISCONTINUED In Pakistan

Maruti Ciaz will soon get discontinued from our neighbouring country, Pakistan. The C-sedan is imported to Pakistan via CBU route from Thailand.

Maruti Ciaz is among the most successful C-sedans in our market, but in our neighbouring country Pakistan the case is totally different. According to a recent report by a CarSpiritPK, Maruti Ciaz will soon be discontinued in Pakistan. India is one of the closest countries to import the sedan in Pakistan. Nevertheless, The C-sedan is imported to our neighbouring country via CBU route from Thailand. The manufacturing of the Pak-spec Ciaz takes place in the company’s production facility in Rayong, Thailand. Thai auto market switched from old Ciaz to the new model in March last year. Our neighbouring country will discontinue the pre-facelift model without any replacement as the demand of the sedan is quite less. 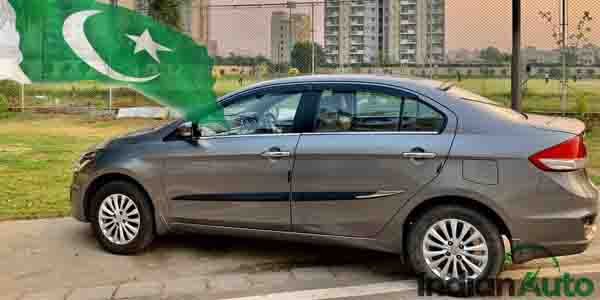 The Pak-spec Ciaz is powered by K14B 1.4-litre petrol mill that powered the pre-facelift model in India

The report also says that the Pak Suzuki has never seriously marketed the car in the country. Another reason behind the failure of the sedan is the insufficiency of features. The Pak-spec Maruti Ciaz does not employ features like alloy wheels, steering-mounted control, touchscreen infotainment system, automatic climate control and much more. Mechanically, the Pak-spec Maruti Ciaz is propelled by a K14B 1.4-litre VVT NA four-pot gasoline engine, which churns out 92.45 PS of power at 6,000 rpm and 130 Nm of twisting force at 4,000. The engine comes coupled to a 5-speed MT or either a 4-speed automatic gearbox. In Pakistan, the Maruti Ciaz is priced between PKR 23.00 lakh (Rs 10.88 lakh) for the MT trim and goes all the way up to PKR 25.00 lakh (Rs 11.83 lakh) for the automatic variant. On the other hand, the India-spec Maruti Ciaz is offered in four different trim levels namely- Sigma, Delta, Zeta and Alpha. It is priced between Rs 8.32 lakh (ex-showroom, Delhi) to Rs 11.1 lakh (ex-showroom, Delhi). It derives power from a BS6-compliant 1.5-litre four-cylinder petrol engine that produces power and torque outputs of 103bhp and 138 Nm. Transmission duties are done by a 5-speed MT or an AMT gearbox. The C-sedan competes with the likes of Hyundai Verna, Honda City, VW Vento and Skoda Rapid.