0 0
The more rugged version of Maruti S-Presso, the S-Presso X has been rendered for its futuristic look.

Maruti Suzuki’s aggressive answer to the Renault Kwid, the SUV-ish entry-level hatch S-Presso has officially entered the game on the 30th of September, 2019. Just around 11 days of launch, the S-Presso has achieved the initial success by creating the first milestone of 10,000 bookings. Reports suggest that Maruti Suzuki is likely to introduce a more rugged version of the S-Presso in the coming months. Our digital illustrator has worked on the rendering of one such variant that’s to be called S-Presso X and here’s the work. 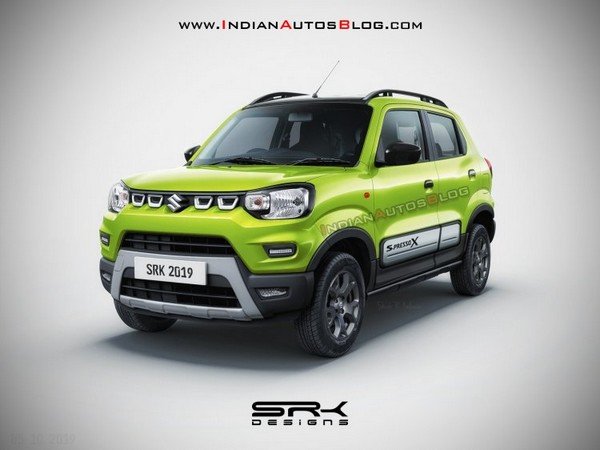 Maruti Suzuki might launch a more rugged derivative of S-Presso in India, which has been imagined in this speculative rendering.

The SUV -like styling formula isn’t new in the segment of hatchbacks. We’ve had the Datsun redi-GO or the Renault Kwid that also bring in the concept of a rugged-looking crossover-inspired hatchback in the market already. Following the same route, Maruti Suzuki has designed the S-Presso with a muscular silhouette, upright stance, flat bonnet and larger wheel arches. The S-Presso X is expected to follow the footstep of the S-Presso and will even endear itself with more visual elements for a sturdier look. The new S-Presso X is expected to be sharper and sportier than the S-Presso but they still share the same platform and powertrain system.

At the front, the more rugged derivative gets dual-tone treatment on the bumper that has been added with more lights. The side profile of the car sees the presence of an S-Presso X badge finished in silver combined with sportier gunmetal alloy wheels, giving the car a more aggressive effect. It also comes with black-coloured wing mirrors, blackened roof and roof rails among others.

There aren’t many changes on the inside of the S-Presso X. The design and features might be quite similar to those of regular models, except for some colour-coded bits on various parts like door handles, centre console, AC vents along with the exclusive upholstery, possibly.

Mechanically, the Maruti S-Presso X will borrow the current engine-transmission setup from the S-Presso to keep the costs in check. It will continue to be underpinned by the fifth-gen Heartect K platform and gets the power from a BS6-spec 1.0-litre K10B petrol engine generating 68 PS at 5,500 rpm and 90 Nm at 3,500 rpm. Transmission options include a 5-speed MT and an AMT unit.