Maruti Suzuki is one of the oldest carmakers in the country. It is also the largest carmaker of the country in the passenger vehicle segment. Maruti started selling commercial vehicles in India in the year 2017 with the Carry (Mini truck) and Eeco Cargo. Now the commercial vehicle vertical of the manufacturer has grown multiple folds with over 320 dealerships across 235+ cities in the country. In a bid to keep this momentum intact, Maruti Suzuki’s commercial node has introduced its Tour range of products – Tour H1, Tour H2, Tour S, Tour V, and Tour M.

Also Read - This is What the 2020 Maruti Dzire Facelift Could Look Like.

The new Tour range of products from the Maruti Suzuki Commercial network will be the first-ever passenger vehicles to go on sale under this umbrella, as the commercial chain of Maruti sold only goods carrying vehicles till date. Talking of these new products, the Tour H1 is the fleet-compliant version of the smallest car from Maruti – Alto 800. The Tour H2 is the essentially a Celerio, while the Tour S is the last-gen Dzire. The Tour V is the passenger-commercial iteration of the Eeco and the Tour M is the latest generation of Ertiga.

“Maruti Suzuki’s Commercial channel is the fastest-growing commercial network in the country. A majority of the Commercial network customers comprise of ‘owner-cum-driver’ who are ambitious, risk-takers and are looking for recognition. Their primary need is to get a stable income, and these vehicles contribute as a source of livelihood for them. Similarly, the fleet owners seek increased productivity, improved earnings and expansion of their business. Our internal research suggests that both these goods carrier owners as well as passenger carrier owners have similar business needs. Recognizing this as an opportunity, we decided to consolidate our commercial offerings under one roof.”

Also Read - Maruti S-Presso On Sale With Discounts Worth Rs 45,000. 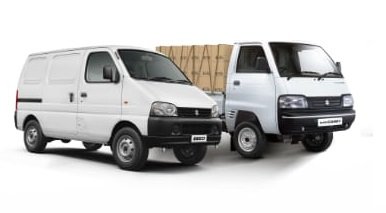 Maruti Suzuki Commerical network initially started with the Carry and Eeco Cargo in 2017.

These vehicles will be offered as AIS-140 (Automotive Industry Standard) compliant units. Thus, they will feature a factory-fitted panic/SOS button, AIS-140 compliant GPS GNSS receiver for the VLTD (vehicle location tracking device) that can keep a track of the vehicle location and also the monitor the driving characteristics of the chauffeur. Also, these vehicles will come fitted with an electronic speed limited, which would define their top-speed at 80 kmph.