German’s legendary auto marque, Mercedes has teased the CLA 35 on a video before its imminent global debut. The A35 hatchback-sourced 2.0-litre engine revealed.

Mercedes-Benz is starting over the teasing game for the all-new CLA 35 sedan all around the markets. The teaser video went online via Facebook yesterday, hinting out that its international uncovering will take place within the next few months. This is almost everything carmaker says about the CLA 35 four-door coupe so far. But thankfully, information is not scarce at the points of the aesthetics and specifications.

The Mercedes-AMG CLA 35 is a premium luxurious, sporty sedan that keeps a 2.0-litre, 4-cylinder turbocharged gasoline engine under its hood, good enough for 306 horsepower and 400 Newton-meters as similar as the A35 red-hot hatch. As can be seen in the new teaser, a 7-speed dual-clutch AT unit will be employed as the transmission option of the vehicle which will be in charge of delivering the power output to the 4Matic all-wheel-drive system. This means that the CLA 35 sedan will borrow the engine-transmission setup from the A-Class hatchback in some certain auto spaces. In other words, the brand new model will feature the 4Matic Sport Driving mode as its bells and whistles for a stellar performance along the roads. However, the all-new four-door coupe will be heavier than the Mercedes-AMG A 35 4Matic older brother so it should take a bit longer to shoot up to 100 km/h from a standstill than the A35 hatchback which can do it in 4.7 seconds. 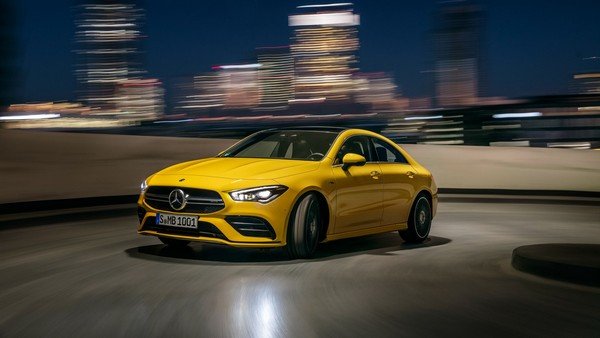 Mercedes-AMG CLA 35 appears stunningly in a yellow shade of paint in the company's latest teaser video.

The Mercedes-AMG CLA 35 once debuts will be a sleeker but funkier version of the A-Class and likely to become the mightiest member in the CLA family till when the CLA 45 model comes under the light. That said, the latter CLA 45 will be a more powerful wheel with a 2.0-litre engine option churning out more than 400 hp of power while its S variant is believed to rocket the street with more decent power generated in its heart.

Currently, we have the Mercedes-AMG C43 Coupe available in the market at the price sticker of around Rs 75 Lakh (Ex-showroom, India). The carmaker has not announced launching the AMG CLA 35 in India. As stated earlier, the sedan will be more likely to wrap off to the world quite soon, and the upcoming New York International Auto Show sounds an appropriate venue. Stay tuned and updated for more details of the vehicle as well as carmaker’s official statements with Indianauto.com!