MG Hector Plus Launch in 3-6 Months

MG unveiled the Hector Plus at the auto expo with a flexible seating option of 6 and 7 seats, and it will be launched in a span of 3 to 6 months from now.

MG Hector is performing disruptively well in the Indian market. So much so, that the car was announced sold-off for the year 2019 in the month of October itself. The car was initially launched as 5-seater, and now the manufacturer has showcased the 6 and 7 seater version of the car at the ongoing auto expo. It is named as Hector Plus and the Plus suffix comes with a few extra seats inside the car and some changes to the car’s exterior. With these changes, MG has also announced that the Hector Plus would be launched in a duration of 3 to 6 months from now, and will adopt both 6 and 7 seat configuration. 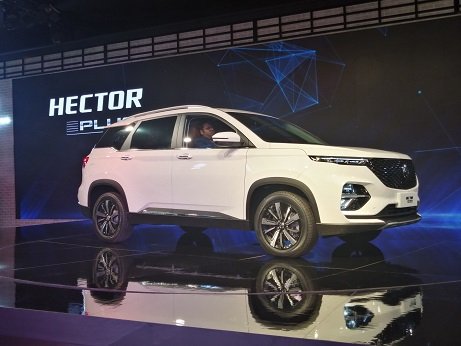 Showcased at the auto expo, Hector Plus will go on sale in 3-6 months form now.

The 6 seat layout will have captain chairs in the second row, while the 7 seat version of the Hector Plus will have bench seats in second as well as third row. How spacious the Hector plus would be with these new 6 and 7 seat layout is something we can’t comment on, as MG has not revealed the interiors of the car.

Talking of the changes on the outside, the Hector Plus features a revised front end with a bigger grille and sleeker LED DRLs that give the front fascia a fresh appeal altogether. The bumper on the front is also changed and so’s the headlamp assembly. The changes on the rear of the car are also performed in a similar fashion as the front. The lines are a lot smoother and free-flowing in comparison to the outgoing car, which has sharper lines and creases around its profiles. With more seats and revamped exterior, Hector Plus justifies the ‘Plus’ suffix well. However, we are sure of that Hector Plus will carry an added premium over the car’s current price tag and it is expected to be around Rs. 1.5 lakhs. Once launched, the Hector Plus will rival against the likes of Mahindra XUV500, Tata Gravitas, and more.