MG Hector will be offered with two engine and transmission combos in regard to the mechanical bits. The launch is expected to happen around mid-June 2019.

MG Motor is all set to step into the Indian boundaries with the introduction of the MG Hector which has been marketed as one of the best-connected SUVs ever since in the domestic market. MG’s first SUV, the Hector will mark its public unveiling on May 15, 2019, and the launch timeline is set for sometime in June of the same year.

The SAIC-owned British brand, MG Motor in an official announcement, has confirmed that it is gaining ground for its operation in India with the establishment of 65 showrooms spread around 50 cities across the nation. Recently, MG Motor has also opened the first official dealer meeting in which the new Hector came under the spotlight for the dealerships. In another movement, the company has already announced that MG dealers are on their ways to open the pre-booking scheme for the new SUV within next month onwards. Price for the MG Hector is estimated to sit in the range of Rs 15-20 Lakh (ex-showroom, India). 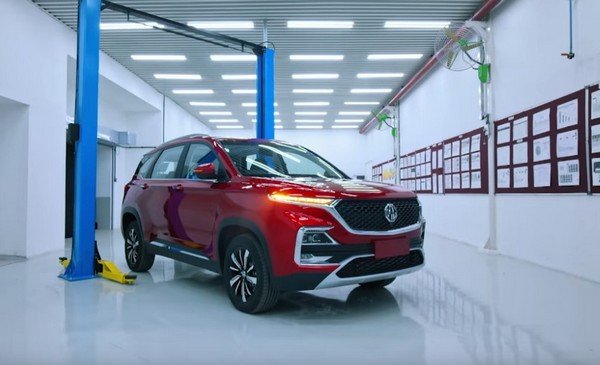 The pre-bookings for the all-new Hector will be started across MG's dealers in June 2019.

To remind, the all-new MG Hector will draw the energy output from a 143 hp 1.5-litre turbocharged petrol engine along with a 173 hp FCA-sourced 2.0-litre oil burner and both of which will be offered with a 6-speed manual transmission. Particularly, the turbo-petrol engine might get another option of a 6-speed dual-clutch automatic transmission along with the standard 6-speed MT. Among other things, the petrol powertrain of the Hector will be supported by a 48-volt mild-hybrid system and all that is pledged to be 12 per cent more frugal than the conventional petrol variant.

With the commercial launch of the Hector is knocking on the doors, MG Motor India is going the extra mile to enhance the manufacturing capacity of the company’s new Halol plant in Gujarat with a whopping investment of around Rs 2,200 crores. The company is getting on setting up a new assembly line, parts distribution centre, press shop and body shop, etc. in the factory, which is of help escalate the plant’s current production capacity up to 80,000 units per annum. Along with it, the Morris Garages has recently come up an exclusive video hinting at how a Hector is being manufactured in the production line as part of its marketing strategy ahead of the India launch.