MG ZS EV revealed in India, to be launched in January 2020

MG has unveiled its ZS EV in India, which will be officially launched by January 2020. Initially, MG will launch ZS EV in India in five major cities- Delhi, Mumbai, Bengaluru, Ahmedabad and Hyderabad.

MG Motors has finally revealed its all-electric SUV into the Indian market named as MG ZS. This all-electric SUV now rubs its shoulders against the likes of Hyundai Kona. After the Hector SUV, this is the second product offered by the Chinese carmaker in our market. The MG ZS EV will be officially revealed in our country by January 2020. Initially, MG will launch ZS EV in India in five major cities- Delhi, Mumbai, Bengaluru, Ahmedabad and Hyderabad. The India-spec MG ZS EV will be propelled by an electric mill which develops 141 bhp of power and 353 Nm of twisting force. The electric motor is fed by a 44.5 kWh battery pack. Through a 50 kW fast-charger, the battery pack can be charged up to 80 per cent within just 40 minutes. On the other hand, a 7 kWh charger will take up to 7 hours to completely charge the MG ZS EV. Moreover, the MG ZS EV will offer a range of 340km in one full charge. The SUV can sprint from 0-100 in 8.5 seconds. In terms of dimensions, the MG ZS EV is quite identical to its UK counterpart. The electric SUV is 4,314 mm long, 1,809 mm wide, 1,620 mm in height and has a wheelbase of 2,519 mm. The car comes loaded with a decent amount of features. It gets projector headlamps with LED DRLs upfront, a panoramic sunroof, an 8-inch touchscreen infotainment system with Apple Car Play and Android Auto compatibility.

Also Read: Kia Seltos Vs MG Hector Caught Standing Side By Side – Which one looks better? 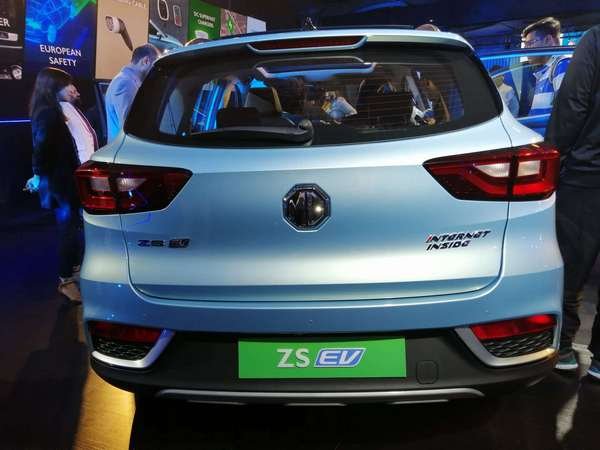 At the front, the MG ZS EV employs a large grille which also houses the charging port. The illumination duties are done by projector headlamps along with LED DRLs. The bold shoulder lines give the MG ZS EV a dominating road presence. On the inside, the SUV looks quite elegant. It gets Silver coloured highlights on the dashboard, air-con-vents, and on door pads, which enhances the premium quotient of the SUV. MG is also planning to bring more electric vehicles to the Indian market and these new models are expected to be showcased at the 2020 Auto Expo.