Earlier today, Maruti Suzuki launched the refreshed Brezza in the Indian market. Among the most significant updates for the sub-4-metre SUV include the advent of a BS-VI compliant petrol engine. Also, available at a starting price of Rs 7.34 lakh (ex-showroom, Delhi), the new model is also Rs 28,000 cheaper than the car it replaces. However, this just half the story. Read on to know why.

As can be seen in the below list, it is easy to see that only the LXi (base) variant of the 2020 Brezza is cheaper than the LDi (base) trim of the pre-facelift diesel-powered model. Other than that, every other variant of the new model is more expensive as compared to the equivalent of the older version. The maximum price difference can be seen between ZXi+ (AT) Dual Tone and ZDi Plus AMT Dual Tone. The price difference adds up to Rs 81,000 between both models.

From the above, it's quite clear that only the base model is cheaper than before but another way to look at it is that the hot-selling SUV is now more accessible than before. It's also worth mentioning here that all variants except for the LXI trim come with push button start, LED DRLs, LED projector headlamps, automatic aircon and steering mounted audio controls. 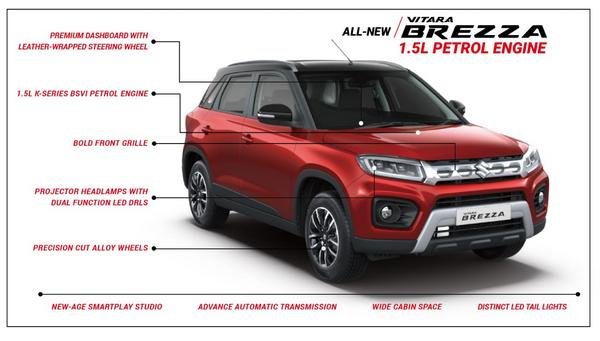 Outside, the Maruti Brezza facelift employs LED projector headlights, a new bumper that features LED fog lamps along with a new smart-looking grill which boasts faux carbon-fibre accents. The side profile of the Brezza facelift also gets a refresh thanks to new machine-cut alloy wheels (offered with the top-spec trim). Completing the overall picture is an updated rear profile. It consists of new taillights and bumper along with a faux skid plate.