New Tata Sierra won’t be a 3-door SUV, Will be Positioned above Nexon EV

Tata Motors has revealed that the production-spec model of the Sierra EV concept will not feature a 3-door design or tail-mounted spare wheel, unlike the original Tata Sierra.

A piece of disappointing news for Tata fans; the home-grown manufacturer has revealed that the production version of the new Tata Sierra concept will not be a 3-door vehicle with a spare wheel mounted at the rear, unlike the original SUV, which was introduced in India back in 1991.

When asked about the prospect of a 3-door Sierra on Twitter, Pratap Bose, VP – Global Design, Tata Motors, replied that the market demand for such products is too low to justify building one. 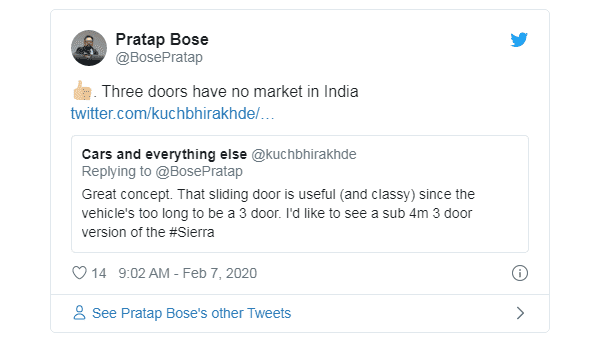 Continuing his Twitter spree, Bose also confirmed that there won’t be a tailgate-mounted spare wheel, which used to be a defining feature of SUVs back in the day. 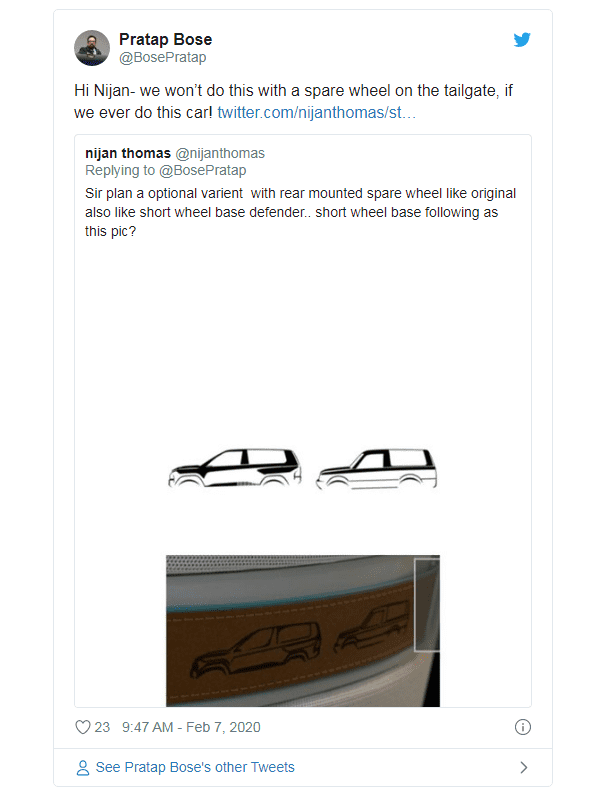 The new Tata Sierra showcased at Auto Expo 2020 was an EV concept car. The specifications of the electric vehicle haven’t been revealed yet, but is expected to carry the same powertrain as the recently launched Tata Nexon EV. Tata’s ZIPTRON technology is the latest in EV tech in the market, with 8-year warranty and IP67 dust/water protection. When the tech was first unveiled to the public, the company had also stated that there were four EVs in the pipeline. Three of them have been confirmed – Tigor EV, Altroz EV, and Nexon EV. The last one could very well be the Sierra EV, although nothing can be confirmed at this point. The new-generation Tata Sierra will be based on Tata’s ALFA platform, which also underpins the Gravitas and Harrier. The rear-doors of the production-spec model might be the same as the sliding doors present on the concept vehicle, but won’t be manually-operated instead of power-operated. The Sierra will also probably be longer than 4-metres, making it bigger than the Nexon. The company could also be planning of pitting this vehicle Hyundai Creta and Kia Seltos. What this also means is that the production version, if and when it comes into existence, will be positioned above the Nexon EV in the company's electric car lineup. However, it is worth mentioning here that the production-spec model would even have ICE options, which will help the company take on the aforementioned South Korean small SUVs.