21 0
The facelifted Tata Tiago will arrive in the Indian market by the dawn of 2020. A digital auto illustrator of Indian Autos Blog has rendered the expected design of the new model.

Shortly after its launch in 2016, the Tata Tiago became a notable successor in Tata’s vehicle lineup as well as the domestic hatchback segment. Though the gap from the no.1 spot in its segment is still far, the Tiago is certainly the best-selling Tata model in India up to now. That explains why the upcoming updated Tiago hatchback is among the most-anticipated car launches in FY 2019-2020. Shoeb Kalania, who is currently a digital illustrator of IAB has released a rendering of the Tata Tiago facelift, giving out the first glimpse of the forthcoming Tata offering. The rendered Tiago shows up with a new JTP-style chrome-finished headlights, chunky chrome strip on the base of front grille, bulkier front bumper with sharper profile, vertical LED daytime running lights, newly rectangular fog lamps as well as a new set of dual-tone alloy wheels, etc. all adding to the car’s premium styling.

As regarding the safety kits, the all-new Tata Tiago will likely to feature crucial fitments like driver seatbelt reminder and airbags as standard to pursuant to the new mandatory safety regulations in July 2019. Seatbelt reminder for front passenger and high-speed alert are yet to see in the model. 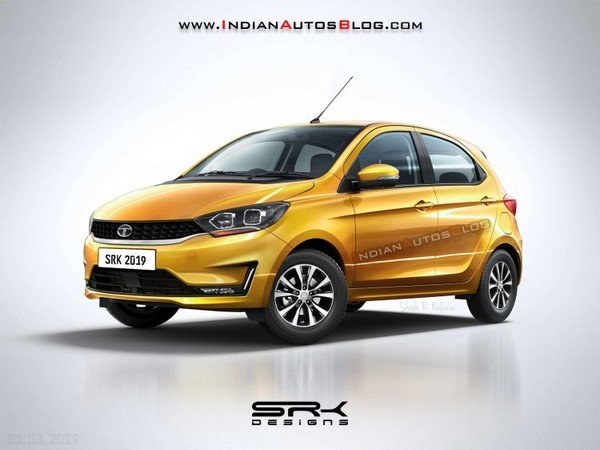 Currently, the Tata Tiago hatchback is deploying two engine options under the bonnet including a 1.2-litre Revotron three-cylinder gasoline motor tuned for 85 PS/ 114 Nm units as well as a 1.05-litre three-cylinder oil burner good enough for 70 PS/ 140 Nm units. As there is no statement on the Tiago’s launch timeline available these days, the engine-transmission upgrade to BS-VI emission norms is yet to be confirmed. However, we can expect BS-VI powertrain system on the Tiago facelift in case the launch takes place at the end of 2019.