Nissan has teased its upcoming Maruti Brezza rival as ‘A Legend in the Making’. The new compact SUV is slated for launch by the mid-2020.

The upcoming Nissan SUV, which is expected to become a formidable competitor to the Maruti Vitara Brezza, Hyundai Venue, Ford EcoSport, Mahindra XUV300 and Tata Nexon, has been teased through an image which unveils the tailight design with the quote ‘A LEGEND IN THE MAKING, LIGHT UP YOUR IMAGINATION’. Based on the Nissan’s ‘Make in India, Make for the World’ strategy, the vehilce is expected to break its cover in the foreseeable future and is likely to be launched in mid-2020. 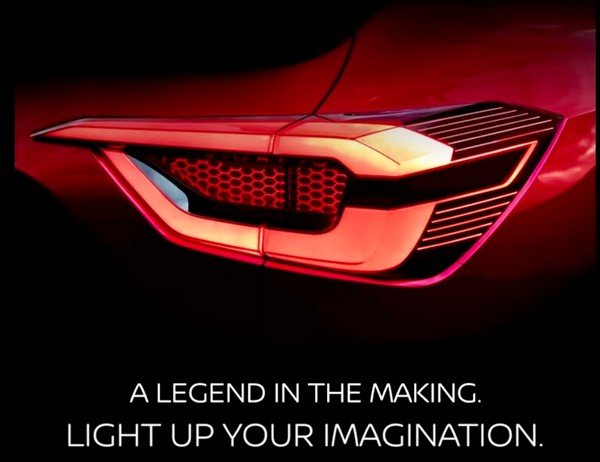 Nissan's new compact SUV has been teased with LED taillights.

Up to now, two teaser images of the new compact SUV have been released. These images unveil that the vehicle will feature a honeycomb grille and LED taillights. Moreover, the new model will also come with a floating roof and a two-tone paint scheme. Mechanical specifications of the compact SUV have not been revealed yet; however, it might reveive its power from a 1.0-litre gasoline burner which will generate 95 HP and will be mated to an MT/AMT unit.

According to the Japanse auto manufacturer, the new compact SUV is going to be “a feature-rich premium offering with stylish design for a strong and dynamic road presence.” The vehicle will be underpinned by the Renault-Nissan Alliance’s CMF-A+ platform which also supports the HBC compact SUV and the Renault Triber. The new model will be designed by the design team in Japan. Nevertheless, as much as 98% of the parts will be localized to keep the price as aggressive as possible. The manufacturing process will be implemented in Nissan’s plant in Oragadam, Tamil Nadu.

Among the toughest rivals that the upcoming Nissan SUV would face is the Maruti Vitara Brezza, which recently received a facelift and a new engine.

While the price range of the Maruti Brezza’s rival will be announced once it is launched, the upcoming Nissan SUV is anticipated to become one of the most reasonably-priced models in the segment which will welcome a Renault’sibling later this year. Both of the SUVs will likely have uninqe design with slight differences in the feature list.