In the run up to the unveiling of its Hyundai Venue and Tata Nexon rival, the Nissan Compact SUV has been teased yet again through an image that reveals the taillamp design

Nissan India has just released the second teaser image of the its upcoming Hyundai Venue and Tata Nexon rival in an image that reveals the taillamp design. The new Nissan compact SUV will be revealed in near future and is likely to go on sale by the middle of the ongoing calendar year. The new model is based on the company’s ‘Make in India, Make for the World’ strategy. In the words of the manufacturer, the upcoming Nissan compact SUV will be “a feature-rich premium offering with stylish design for a strong and dynamic road presence.” Underpinning the new model will be the Renault-Nissan Alliance’s CMF-A+ architecture, which will be shared with the Triber and the HBC compact SUV. The aesthetics of the new Nissan compact SUV will be the work of a design team based out of company’s headquarters in Japan. However, up to 98 per cent of the components will be localized in India to keep the sticker price attractive. The new model will be manufactured at the company’s Oragadam-based production facility in Tamil Nadu.

So far, the company has issued two teaser images of its upcoming compact SUV. These pictures confirm that the Hyundai Venue-rival will sport a honeycomb grille and LED taillamps. Also, it has come to light that the new model will have a floating-effect roof and will be available with dual-tone paint options. Official specifications of the upcoming Nissan compact SUV aren’t out at the moment but it’s likely that the new SUV will be powered by a 1.0-litre three-cylinder petrol engine that will output a maximum power of 95bhp. Transmission options will include manual and AMT units. 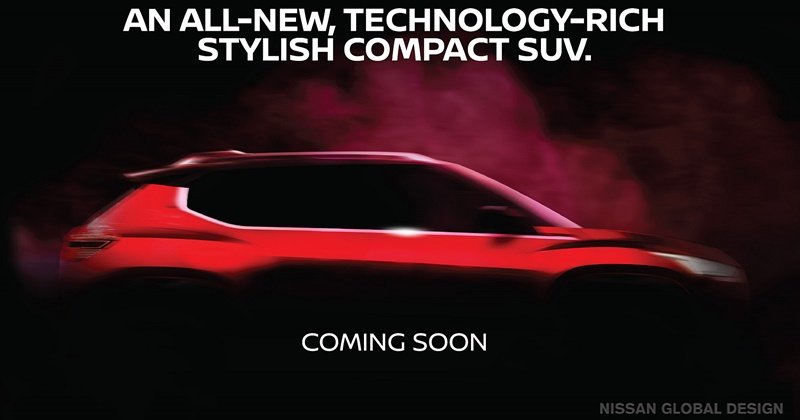 While prices of the new model will be announced only at the time of its launch, it’s expected that the SUV will become one of the most affordable models in its segment. Moreover, it will be joined by a Renault-badged sibling later this year, though both the models are expected to have distinctive styling and slight variations in the respective equipment lists.