Odd-Even Scheme Is Back For Delhi Road Users, Will Ply From 4-15 November

The Odd-Even scheme will be implemented form 4th Nov to 15th Nov in the state of Delhi, if the pollution exceeds than a certain level.

Arvind Kejriwal, the chief minister of the country's capital city Delhi has announced the implementation of the road divide-out scheme wherein the vehicle with registration numbers ending with an odd digit would be allowed on the dates with odd number while the even-numbered plate holders will be allowed only on the date with an even number. This is not the first time that the Delhi government has come up with this scheme to curb the pollution levels of the city, instead, this would be the third such attempt from its work tenure. The Odd-even scheme in Delhi is planned to come in effect from 4th of November to 15th 2019.

The implementation of the Odd-Even scheme is subjected to the persistence of "Severe Plus" pollution levels for more than 48 hours. The scheme is planned to come in effect from 4th of November to 15th 2019.

The pollution levels in the capital city throughout the year are not as disturbing as they are around the month of November, as the neighboring state of UP, Punjab, and Haryana experience the burning of stubble of the harvested crop by the farmers and the smoke gets coagulated in the national capital. A lot cannot be done about this issue, as the westward directional flow of air and higher atmospheric pressure also aid in the process and nothing can be done about these geographical disturbances.

In the previous implementation of the odd-even scheme, an exemption towards woman drivers and motorcyclists was seen, but no information on this ground is available as of now and a detailed implementation notice is yet to be released.

To further curb the pollution levels of the Delhi during the stubble or parali burning the road users would see mechanized road cleaning, water spraying to let the smog suspension settle down, and distribution of anti-pollution masks will also be done. 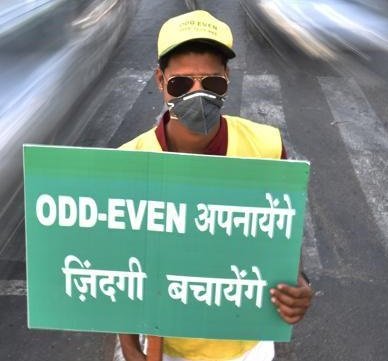 If pollution does not cross the danger levels set by the Central Pollution Control Board the scheme will not be implemented .

To make sure that the commuters from the city do not suffer from this implementation, Kejriwal quoted, “We will utilize our experiences of implementation of odd-even schemes twice in the past in Delhi and under the long-term plans to improve air quality in the city to "good" category, the government will soon announce its bus aggregator and e-vehicle policy”.

If planning not to abide by this rule, then do learn about the fine of Rupees 2000 that was imposed on the defaulter during the previous two experiments of the same odd-even rule and it could be an increased amount this year.

While this does sound like a good and acceptable approach to curb the transient rise in city’s pollution level, the studies have shown that it can only bring down a 10-13% reduction in the pollution levels at its max. And such implementation should rather be outcasted by the proper check to the emission levels from the ill-maintained vehicles.