Renault Kwid EV has been spotted again with less coverage than the previous spy images, revealing more details of the highly-awaited electric vehicle.

Renault KZE is one of the most notable new faces at the Paris Auto Show, especially for the Indian market. The KZE will come into life as the electric sibling of the Kwid, one of the popular entry-level models in our market.

After the introduction at the PAS, the Renault EV has been spotted doing road testing one time in its production form. Previously, some images of the Renault EV in full camouflage has been leaked. Recently, it has been spied in more revealing camouflage. Let’s see how the Renault Kwid would look like from the latest spy shots. Renault Kwid EV inherits the majority design clues from its internal combustion counterpart. However, the EV version still gains its own distinctive styling element to create its own identity. For example, Renault Kwid EV will get the new front bumper and grille. The rear side also receives considerable dashes of updates.

Interiorly, it will also receive a new instrument cluster and new upholstery. New features are also expected. The EV version might come with a touchscreen infotainment system, power windows, rear camera along with rear parking camera. About the powertrain, it still remains unclear what mechanical setting will be put out on the Kwid EV. As far as we know, the KZE concept has the range of 250km. 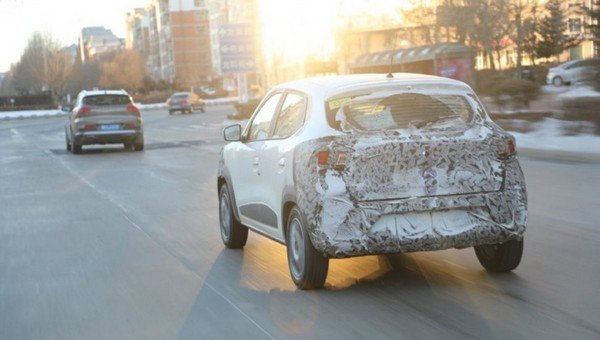 Renault Kwid EV is developed on Dongfeng's plant in Shinyan

The production Kwid is now developed under the partnership between Renault and Dongfeng, a Chinese automaker. And the manufacturing of the Kwid EV will also be commenced in Dongfeng’s plant in Shiyan.

The EV hatchback is expected to come across by the end of 2020. For the Indian market, it might take another year to finally arrive. The primary price is predicted to be around 6 lakh.

For the regular Kwid, Renault currently brought in small updates across the range, which include driver airbags, ABS with EBD and seat belt reminder in order to boost sales. However, the attempt didn’t meet the initial expectation and the carmaker will pull out their next version this year.