Renault has showcased the AMT version of the Triber at the auto expo, but the manufacturer also showcased a new 1.0L turbo-petrol engine that will be seen on the Triber soon.

Renault has been introducing a series of updates to its lineup. In this array of updates, the Triber has got itself an updated 1.0L engine. Triber was already equipped with a 1.0L 3-cylinder engine without a turbocharger, which it now has. The turbocharged engine that the Triber gets is codenamed as HR10 internally and will be named as TCe (Turbo Control Efficiency) for the market. The 1.0L TCe engine will produce 100PS and 160Nm of peak power and torque output with the Triber. 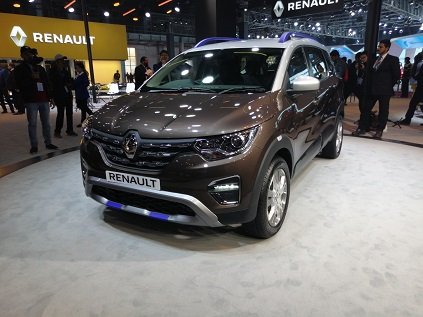 Renault showcased the dual-tone version of the Triber with a 5-speed AMT at the auto expo.

However, there would be another version of this engine which will churn out 117PS and 180Nm as its peak power and torque output. But this state of tune will not be available with the Triber. The powerful iteration of this 1.0L turbo-petrol engine will be reserved for the upcoming Renault HBC sub-4m SUV, which will make its debut by the end of this year. Talking of the transmission, the Triber is expected to come with a 5-speed manual transmission. Will a CVT be made available with this updated engine is we are not sure of, but the 5-speed AMT will still be on sale with the outgoing 1.0L SCe engine that produces 72PS. Renault showcased a 1.0L turbo-petrol engine that will be seen doing duties on the Triber soon.

The HR10 1.0L engine is actually a downsized version of the powerful hr13 1.3L turbo-petrol engine that Renault showcased with the Duster. The 1.3l TCe engine is a turbocharged 4-cylinder unit that is co-developed by the Renault-Nissan-Mitsubishi Alliance and Daimler. It has a rated output of 160PS and 250Nm as its peak power and torque output. It is will makes its way to the Duster’s hood, making it the very first car to come propelled with this engine.

The TCe series of engines will also be seen under the hood of cars like the upcoming Renault HBC sub-4m SUV and the sub-4m SUV offering from the Nissan, which was recently teased by the manufacturer.