Suzuki Jimny Black Bison Edition Will Get You At Awe

71 0
Suzuki Jimny Black Bison, the officially modified version of the Jimny Sierra, is a stunner. Let’s take a look at this beautiful machine

The latest-gen Suzuki Jimny has been gaining popularity in the European market as well as in Japan, its home country. The demand for Jimny is much that it far exceeds the supply.  In line with the high popularity of the new SUV, the company recently took the wraps off two concept cars based on the Jimny, the Suzuki Jimny Survive and higher variant Suzuki Jimny Sierra Pickup Style. These two models will be showcased for the first time at the Tokyo Auto Salon next week. However, ahead of the public outing of the two official works from the mother company, Wald International, a Japanese car modifying company, has come up with its own special version. Named the Black Bison Edition, this special model is currently in a digital rendering stage. Cosmetically, the car receives the black paint treatments throughout its body, Matte Grey paint with black elements, which reminds us of the high-end and high-profile off-roaders like Mercedes Benz G-Class and Jeep Wrangler Moab Edition. This version inherits some features of the Jimny Sierra, the variant on which it is based. Some elements of the design are twisted to impress, for example, new fenders, and redesigned front and rear bumper. Apart from that, the Black Bison also gets a new rear spoiler and a front-end integrated light bar. 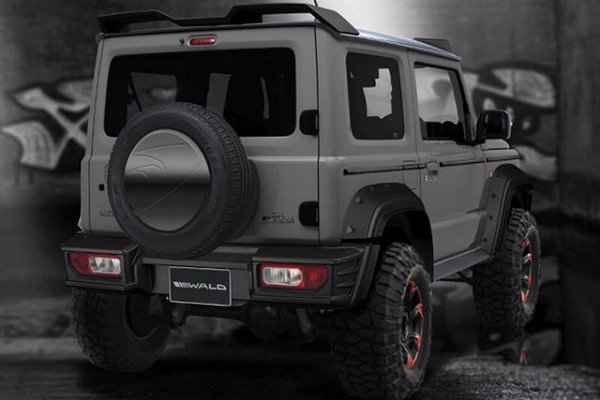 Suzuki Jimny is welcomed by the European customers

Suzuki Jimny Sierra is powered by a 1.5-litre four cylinder K15B petrol engine making the peak power of 102bhp and the peak torque of 130Nm. Transmission options include a 5-speed manual and a 4-speed automatic unit.

>>> Maruti Gypsy To Be Discontinued in March 2019, Possibly Replaced by Jimny