Going by the latest images of the Tata H2X, this vehicle will feature a dual tone interior colour scheme alongside a dual touchscreen unit.

At Geneva Motor Show, Tata has put their new ALFA platform on the spotlight as this platform will underpin a host of Tata’s new cars. In the near future, two vehicles underpinned by this platform will roll off soon. The flexibility of this platform allows itself to fit a wide range of body types, opening an array of possibilities for Tata. It could even fit for electric/hybrid vehicles, which promises to go a long way in the context of mass electrification these days.

Among the vehicles that will be underpinned by the ALFA, H2X Concept is introduced at the Geneva Motor Show this year. Sitting on the micro SUV segment, the production H2X will possibly arrive next year. On the concept form, the small-size SUV boasts a high stance that gives an instant impression of strong presence. Besides, the body is sharply sculptured with bold lines and muscular shape. Some aesthetics elements are added to spice up the overall design, for example, aluminium skid plates, flared wheel arches, and floating roofline. 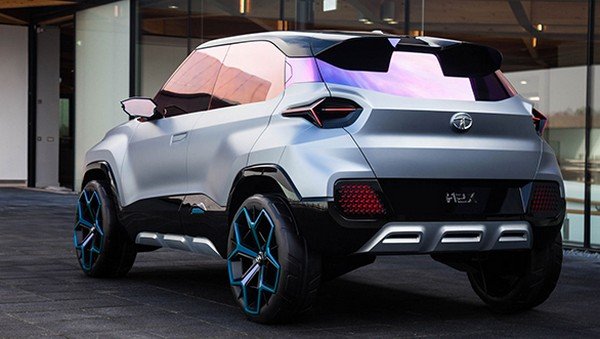 The concept is surely impressive and futuristic. But just like all other car concepts, when it is translated into reality, all the bold and aggressive elements will be played down to suit the average taste. Under the production form, the H2X is speculated to strongly reflect Impact Design 2.0 philosophy developed by Tata with thin LED DRLs, the signature Humanity Line and trio-pattern headlight. H2X will be Tata’s next step in extending the reach of their new design statement.

The most striking part of the H2X is kept inside the cabin of the car. The interior of the H2X Is filled with a futuristic design that is unlikely to be transferred into reality. The half-ring steering and the unusual air vent arrangement, along with the upright infotainment-instrument cluster combined unit. The highlight of the H2X must be the turquoise inserts around the AC vent, on the door panel, the steering wheels and the gear shifter housing, which stand a high chance to appear on the production form.

Even though the innovating design of the twin touchscreen doesn’t seem to be brought to the final version, still, it is expected to get upmarket connectivity kit along with smartphone integration.

When entering the market, Tata H2X will take on the Mahindra KUV100 as well as the Maruti Suzuki Concept Future S.