Tata Motors might soon equip its flagship products, the Harrier and the upcoming Buzzard with an electric sunroof, an independent rear suspension, an AWD system, a petrol motor and an automatic gearbox.

Launched in January 2019, the long-awaited Tata Harrier has attracted numerous customers, thanks to its wide range of top-notch features right from the base variant, and the competitive prices. In February, 1,400 units of Harrier were sold and it is fiercely competing with the Jeep Compass.

However, Tata's premium SUV still has room for improvement: it lacks some important features of a premium SUV in its segment, like a sunroof, an AWD system and an automatic gearbox. To satisfy the customers' demands, Tata is likely to pack the Harrier and its upcoming 7-seater version, the Buzzard, with a wide range of new features. The Harrier SUV was launched in January 2019, lacking some important features

Firstly, the home-grown automaker is reported to be developing the AWD system for the Harrier and the upcoming Buzzard. To the customers' disappointment, Tata announced at the launch of the Harrier that the SUV would not get an all-wheel drive system, due to the low demand for such vehicles. Nevertheless, after realizing that many customers are willing to update from their 4WD Safari and Hexa to the Harrier if it comes with such feature, Tata may have made a decision to equip the Harrier SUV with a 4WD system instead of keeping it strictly FWD.

To further optimize their off-road capabilities, the domestic automaker is also likely to pack both of the SUVs with an independent rear suspension for better ride quality and bumps absorption. Furthermore, they are expected to come with different terrain modes and other off-roading features such as hill-holder, hill descent control system and excellent water-wading abilities. 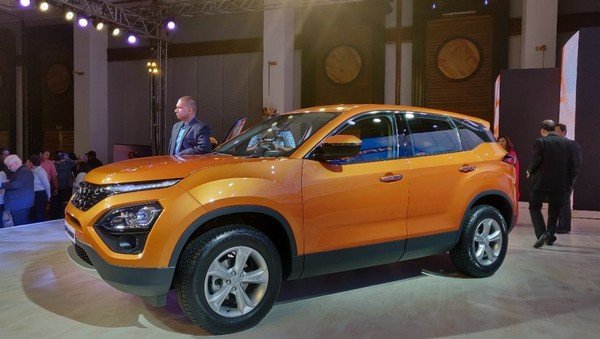 The Harrier SUV is likely to get an AWD system

As regards the performance, the Harrier and the Buzzard might be powered by the 2.0L Kryotec diesel motor sourced from Fiat, which can produce a maximum power of 170 PS (instead of the current 140 PS) and a peak torque of 350 Nm. Tata Motors is also reported to be developing a 1.6L 4-cylinder petrol motor option and an AT gearbox sourced from Hyundai.

Having said that, the most surprising and also maybe the most wonderful news for the Indian auto buyers is that the two SUVs will soon get a sunroof, which is becoming more and more popular among SUVs in India. In order not to sacrifice the headroom and safety for the passengers, a fixed glass roof is likely to be fitted, instead of the conventional sliding one. The addition of all of these above features may make the price of the Harrier SUV increase a little bit. However, at the same time, this will help the vehicle more effectively compete with other ones in the same segment like the Mahindra XUV500 and the Jeep Compass.