Performance Versions Of Tata Tiago And Tigor Could Be Discontinued

A recent tweet from a JTP employee reveals that the Jayem-Tata joint-venture is called off as the manufacturer has pulled the plugs on performance variants of the car.

Indian automotive scenario is currently at its worst as the industry is facing a lot of turbulence from the upcoming BSVI norms. Some manufacturers will stop producing diesel cars from now, while it looks like Tata Motors has pulled the plugs on its performance division “Jayem Tata Special Vehicles’ joint-venture. The Jayem is a Coimbatore-based auto-tuning house, which in collaboration with Tata Motors produced JTP versions of the Tiago and Tigor. However, the remaining stocks of the JTP models of Tiago and Tigor are already sold-out, and there’s isn’t any JTP model in the pipeline now. Tiago and Tigor JTP are the only cars sold under this joint-venture.

Tata Motors has, however, not confirmed of this news, but in a tweet, Mr. Gaurav Sharma, who worked in the marketing team of the JV revealed of that the partnership is now called off. The tweet read as, “@RNTata2000 Dear Sir, I would like to express with a disappointment that JTSV (a joint venture between TML and Jayem) is dissolved. We 25 employees of JTSV are jobless now. Kindly extend your support to the ill-fated employees of JTSV,” but the tweet was soon taken down.

The JTSV was a 50:50 partnership set up by both companies (Tata Motors and Jayem Automotive) in March 2017. In October 2018, Tiago JTP and Tigor JTP were the first product that were launched under this umbrella. The cars produced a peaks power output of 112 PS and a max. torque of 150 Nm. With the Nexon-derived turbo-petrol motor, the cars were offered with a 5-speed stick shift unit only. Apart from the different power plant in comparison to the regular version of the Tiago and Tigor, the JTP variants also had a few styling elements making these car look performance-oriented machines. 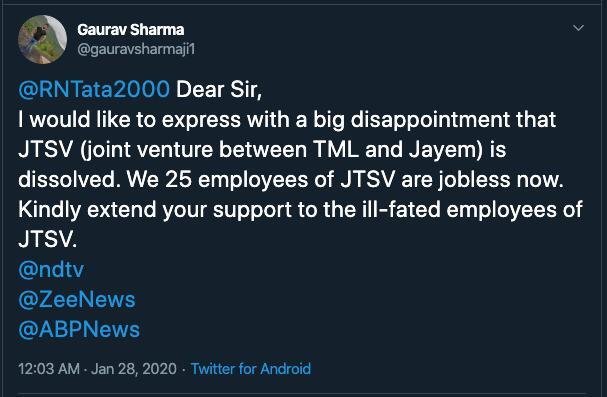 All 25 employees of the JV have been laid-off.

The JTP variants had a functional air scoop on the bonnet, 15-inch alloy wheels, and a resculpted bumper.  Also, the cars were shod with a different exhaust and a blow-off valve as standard fitment. The JTP twins of Tiago and Tigor were powerful and potent car for their price point. However, in an advent to dissolve this partnership, the carmaker has left the employees with no options, but to tweet and seek help for themselves.