Check Out The New TVC for Tata Tigor and Tiago JTP

Last year, Tata Motor introduced the performance-oriented line of the Tiago and Tigor named the JTP. With these performance models, Tata can cater for enthusiastic car drivers. This year, these JTP variants are updated with some cosmetic modifications and new features.

With regards to the exterior of the 2019 Tata Tiago and Tigor JTP, it will be added with new contrasting auto-folding ORVMs as well as a black-coloured shark fin antenna. Apart from these new details, the 2019 versions of the twins will carry the same design as the older model. To create a distinctive identity for the performance models, Tata added blackout grille, dual-tone exterior with black roof, faux hood air vents, diamond-cut alloy wheels, and a restyled bumper, and most notably, a special JTP badge. On the 2019 updated models, all of these special styling elements remain.

Also read - Tata Tiago Vs Tata Tiago JTP - What Are The Main Differences? 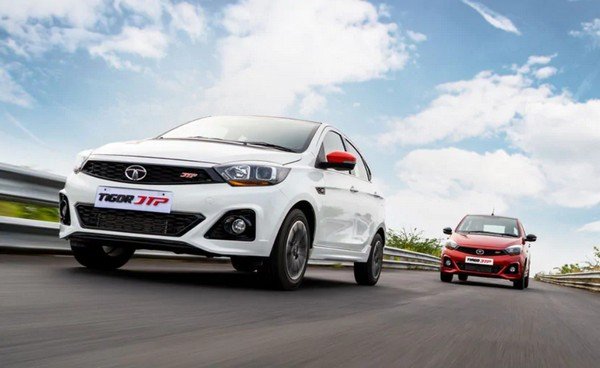 One year after launch, Tata Tiago and Tigor JTP now get their first updates

Updates of the 2019 JTP twins are not limited to the cosmetic aspect. The new Tiago and Tigor JTP also come with a couple of feature enhancements including the addition of automatic climate control and a new 7-inch touchscreen infotainment system with Apple CarPlay and Android compatibility. The latter was previously introduced on the regular top-spec Tiago. The addition of a new touchscreen can address the customers’ demand for a better and more advanced infotainment system.

Also read - 2018 Tata Tiago JTP Test Drive: What Offered On The Performance Version Of The Tiago?

Under the hood, Tata Tiago JTP and Tigor JTP retain the 1.2-litre turbocharged petrol engine that generates a maximum power of 112 PS and a peak torque of 150 Nm. This engine comes with a 5-speed manual gearbox. For a more impressive performance, Tata Motor has tuned the suspension system to deliver a better handing. Besides, the ride height is reduced. Tata Tiago and Tigor JTP adopt wider tyres which help to increase the traction. Some safety fitments found on the JTP models include ABS with EBD, dual front airbags, and corner stability control.

Tata Tiago and Tigor JTP is one sale at the price of Rs 6.69 lakh and Rs 7.59 respectively. These performance-focused models are launched under the JT Special Vehicle brand (JTSV) which is a joint venture between Tata Motors and Jayem Automobiles.