The Tata Tigor EV has been launched in India in two variants including the XT and XM, at a price starting from Rs 9.99 Lakh. For now, the all-electric sedan is available for the fleet market only. 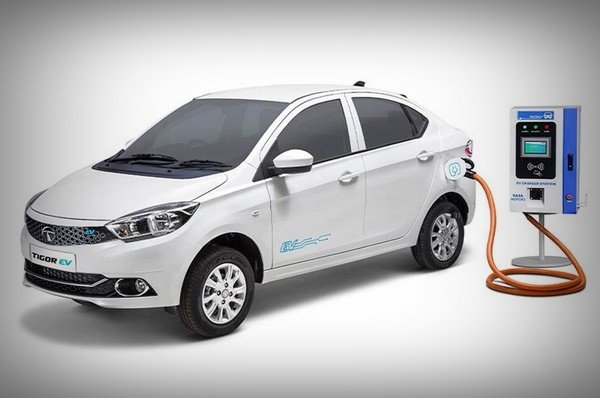 The fully-electric Tata Tigor has been finally launched for the fleet operators in India at the price starting from Rs 9.99 Lakh.

It should be noted that the introductory price of the Tigor EV includes Tax Collected at Source (TCS) and incentives levied by the Government’s FAME II schemes (amounts to about Rs 1.62 Lakh). That means that including the incentives and taxes, the Tigor EV’s price will be jacked up by Rs 4 Lakh as compared to that of the regular petrol Tigor version. From this, the price of the electric sedan will stand between Rs 11.61- 11.71 Lakh. Earlier last week, Tata also launched the Tigor AMT in India at the price of Rs 6.39 Lakh (ex-showroom). The all-electric Tata Tigor offers quite a similar set of safety, comfort and connectivity features as found on the equivalent petrol-powered variants. It gets enough safety kits including dual front airbags, anti-lock braking system, rear parking sensor among others, making it compliant with the upcoming crash test norms which will become mandatory across India on July 1, 2019. Available in two mid-spec grades - XM and XT, the Tata Tigor EV offers three body colour options including white, silver and blue. Both trims are almost identical to each other when considering the features package, although the XT variant gets new 14-inch alloys in place of the steel wheels along with power-adjustable ORVMs which commands an extra premium of Rs 10,000. The sedan is decently-equipped with features as same as the IC-engined model, though, interestingly, the boot capacity of the electric sedan is 89-litre less than the regular model which offers 419 litres of the boot lid. The Tigor EV employs a 16.2-kilowatt-hour battery pack and can cover the range of 142 km on a single charge.

Under the bonnet, both variants of the Tigor EV draw the power from a 16.2 kWh battery pack that generates 41 HP of power at Rs 4,500 rpm and a peak torque of 105 Nm at 2,500 rpm. Power is sent to front wheels via a 72-volt 3-phase AC induction motor. The domestic-grown automaker claims that the electric Tata Tigor can do a range of 142 km per a single charge. The Tigor EV with its battery pack is now available with a three-year/1.24 lakh km warranty.