Here's What Toyota Fortuner Facelift Facelift Will Look Like

Toyota Fortuner facelift was recently spied on test without any camouflage, but the pictures were not clear enough to reveal much about the car. Here's a rendering revealing how it would look like,

Toyota Fortuner is undeniably the king of its segment. The SUV looks modern from outside but it does lack a lot of equipment on the inside in comparison to its competition. Also, the car has been in the market for quite some time now and is due for a mid-cycle refresh. Toyota is, however, working on the Fortuner facelift as the test mules were spied a few days back. Though, the pictures failed to reveal any detail about the SUV as it wore a heavy camouflage once and the pictures were not clear when it was spotted without any camo.  Do not worry about its, as here’s a representational image of the Fortuner facelift uploaded by MZCrazy Cars. A digital rendering of the front fascia of the Toyota Fortuner facelift.

The Fortuner Facelift will feature significant changes to its front and rear facet. It will get a sleeker set of headlamp units with LED projectors and LED DRLs. The grille sitting in between the headlamps will also be a sleeker unit. The front bumper will be resculpted to look sharper and get smaller fog lamp housings and big-wide air dam. The bigger lower air dam will compensate for the loss in airflow due to the reduced size of the upper grille. The spy shots reveal that it will also sport a set of black alloys wheels in comparison to the diamond-cut dual-tone units seen on the outgoing car. The rear-end will also get a new bumper with repositioned reflectors and revised LED tail lamps.

The Fortuner Facelift is expected to come with the same dashboard layout as the outgoing car but with some extra equipment on offer. A new bigger touchscreen display for the infotainment system with voice-support functions, 360-degree camera, and an updated upholstery is expected. The facelifted version is expected to be launched in the Indian market around Diwali this year with a price hike of at least Rs. 1.00 lakh. 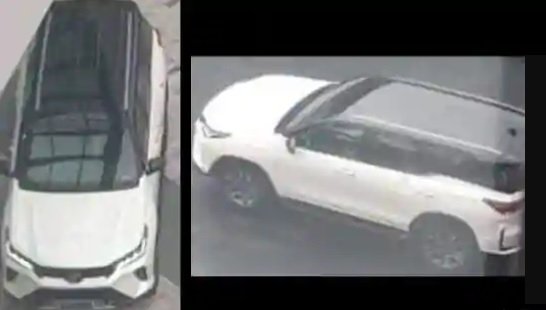 Spyshots of Toyota Fortuner facelift without any camouflage.

The facelift is expected to come with the same set of engines, but downsized turbo-petrol and turbo-diesel engines with a faster AT would make it comparable to the competition. As of now, it is offered with a 2.7L N/A petrol motor that puts out a peak power and torque output of 164 BHP/245 Nm, and comes mated to a 6-speed MT. The 2.8L turbocharged diesel belts out 174 BHP/450 Nm and can be had mated to either a 6-speed MT or a 6-speed AT. With the manual gearbox, the 2.8L mill belts out a peak torque output of 420 Nm only.